What is Sericulture?
Sericulture is an agro-based industry. It involves rearing of silkworms for the production of raw silk, which is the yarn obtained out of cocoons spun by certain species of insects. Cultivation to feed the silkworms that spin silk cocoons and reeling the cocoons to unwind the silk filament for value added advantages like process and weaving are the major activities of sericulture. Silk has been blended with the life and culture of the Indians.
India encompasses an upscale and sophisticated history in silk production and its silk trade dates back to fifteenth century. Silk is the most elegant textile in the world with distinctive grandeur, natural radiance, and inherent affinity for dyes, high absorbance, lightweight weight, soft touch and high sturdiness and called the “Queen of Textiles” the world over Sericulture business provides employment to roughly 8.25 million persons in rural and semi-urban areas in India throughout 2015-16.
It stands for livelihood opportunity for millions owing to high employment oriented, low capital intensive and remunerative nature of its production. From these, a sizeable number of workers belong to the economically weaker sections of society, including girls. India’s ancient and culture bound domestic market and a tremendous diversity of silk clothes that replicate geographic specificity have helped the country to attain variety one position in silk business.

History:-
History of silk:-
According to Confucian text, the discovery of silk production dates to about 2700 BC, although archaeological records point to silk cultivation as early as the Yangshao period (5000–3000 BC).[1] In 1977, a piece of ceramic created 5400–5500 years ago and designed to look like a silkworm was discovered in Nancun, Hebei, providing the earliest known evidence of sericulture.[2] Also, by careful analysis of archaeological silk fibre found on Indus Civilization sites dating back to 2450–2000 BC, it is believed that silk was being used over a wide region of South Asia.[3][4] By about the first half of the 1st century AD, it had reached ancient Khotan,[5] by a series of interactions along the Silk Road. By AD 140, the practice had been established in India.[6] In the 6th century AD, the smuggling of silkworm eggs into the Byzantine Empire led to its establishment in the Mediterranean, remaining a monopoly in the Byzantine Empire for centuries (Byzantine silk). In 1147, during the Second Crusade, Roger II of Sicily (1095–1154) attacked Corinth and Thebes, two important centres of Byzantine silk production, capturing the weavers and their equipment and establishing his own silkworks in Palermo and Calabria,[7] eventually spreading the industry to Western Europe.

India is the second largest producer of silk within the globe. Among the four kinds of silk created in 2015-16, Mulberry accounts for 71.8% (20,434 MT), Tasar 9.9% (2,818 MT), Eri 17.8% (5,054 MT) and Muga 0.6% (166 MT) of the total raw silk production of 28,472 MT.
Mulberry sericulture is principally practised in 5 states i.e. Karnataka, Andhra Pradesh, Assam and Bodoland, West Bengal, Jharkhand and Tamil Nadu are major silk producing states in the country. North East has the distinctive distinction of being the sole region manufacturing four kinds of silk like Mulberry, Oak Tasar, Muga and Eri. Overall NE region contributes eighteen of India's total silk production. 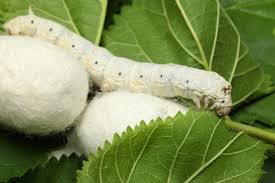 The stages of production are as follows:-

Mahatma Gandhi was critical of silk production based on the Ahimsa philosophy "not to hurt any living thing". He also promoted "Ahimsa silk", made without boiling the pupa to procure the silk and wild silk made from the cocoons of wild and semiwild silkmoths.[10][11][failed verification] The Human League also criticised sericulture in their early single "Being Boiled". In the early 21st century, the organisation PETA has also campaigned against silk.
Advantages of Sericulture:- 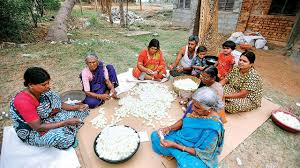 Women Friendly Occupation:-
Women constitutes over hour of those employed in down-stream activities of sericulture in the country. This is the result of sericulture activities ranging from mulberry garden management, leaf harvesting and silkworm rearing is more effectively taken up by the women folks. Even silk reeling business together with weaving is largely supported by them.

1.The extracts of silkworms are also used as food for cattle, which is helpful in increasing milk through them.
2.The extracts of silkworms are also used in biogas and is also used as a fertilizer.
3. The dried leaves of Tuti are used as fuel.
4.Due to the silk farming business, Govt. gets foreign currency, and this helps in the progress of the country.
5.Tuti needs to be trimmed every year and the trimmed Tuti is also purchased by the Govt. With this Rs. 3500 to Rs. 4500 per acre is earned every year.
6.The Tuti leaves are rich in vitamin A, hence Tuti leaves and silk cocoons are used in Pyupa Ayurveda.
7.In foreign countries, people make mulberry tea and wine out of it.
8.The dead cocoons are used in skin care products and in Ayurvedic medicines.
9.The dried Tuti leaves that are used in biogas produce a very good type of gas.

Sericulture is the purposeful area under the Ministry of Textiles. Few of the recent policy initiatives taken by the Ministry to promote sericulture unit are as follows.

Sericulture is considered as agriculture allied activity under RKVY. This enables the sericulturists to avail the advantages of the theme for the complete sericulture activities up to reeling.
The CSB (Amendment) Act, Rules and regulations are notified by the govt. of country to bring quality standards in egg production.
Amendment in Forest Conservation Act to treat non mulberry sericulture as forest based activity enabling the farmers to undertake Vanya silkworm rearing in the natural host plantation in the forests.

Anti dumping duty on Chinese raw silk:-
The Director General of Antidumping & Allied Duties (DGAD), New Delhi has recommended imposition of antidumping duty on Chinese raw silk of 3A Grade & Below in the form of fixed duty of US$ 1.85 per kg on the landed price of imported raw silk vide notification No.14/17/2014/DGAD dated 4-12-2015.
CDP-MGMREGA convergence guideline have been finalized and issued jointly by the MOT and MORD. Farmers can avail assistance from MGNREGA scheme to get benefit from these guidelines.