Next to groundnut, rapeseed and mustard are two most important oilseeds of India. The oil content of these seeds is 25-45% which is used as a cooking medium, preservative for pickles, lubricants and toiletteries. Oil cake forms an important cattle-feed and is also used as manure. 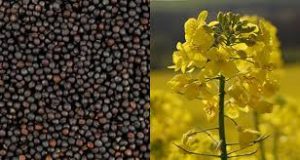 Conditions of Growth:
Like wheat and gram, they thrive only in cool climate of the Satluj-Ganga plain and very small quantity is grown in the peninsular India. They are mainly grown as rabi crop in pure or mixed form with wheat, gram and barley.
Castor Seed:
Castor seed contains 50 per cent oil which is used for various purposes such as lubricant in various machines, hair oil, lighting and for manufacturing soap and leather tanning. Oil-cake is used as manure and leaves of the plant are fed to silk worms.

Conditions of Growth:
Castor seed plant grows into a small tree and is generally raised as a mixed crop in tropical and sub-tropical climates. It thrives well in areas of 20°-25°C temperature and 50-75 cm rainfall. It is grown on red sandy loams in the peninsular India and on light alluvial soils of the Satluj-Ganga plain. Almost the whole area of castor seed production is rainfed. It is a kharif crop in the north and a rabi crop in the south.