Blackberries are a very easy fruit to grow. However tempting, do not grow plants unless you are certain they are virus-free since viruses are a widespread problem with blackberries. Select high quality plants from a nursery with a good reputation.
Types of Blackberries
(Credit to Colorado State University Extension for the detail on specific types of blackberries.)
Training blackberries produce vigorous primocanes (first-year vegetative cane) from the crown of the plant rather than roots. Second year floricanes produce long shaped fruit with relatively small seeds and a highly aromatic, intense flavor. They are not hardy in northern climates, experiencing damage at temperatures of 13°F in mid winter, and in the 20s°F in late winter/early spring.
Erect blackberries have stiff arching canes that are somewhat self-supporting.
However, they are much easier to handle when trellised and pruned. Summer prune or tip primocanes to encourage branching and increase fruit production on the second-year floricanes. Plants can become invasive to an area as it can produce new primocanes (suckers) from the roots.
Erect blackberries which produce fruit with relatively large seeds. Flavor and aroma are not considered as intense as in the training blackberry cultivars. They are semi-hardy in climates with rapid springtime temperature shifts, like Colorado.
Primocane-fruiting cultivars of erect blackberries produce fruit on the new canes. This make management easier as the canes can be cut to the ground each winter.
Semi-erect blackberry plants are thornless and produce vigorous, thick, erect canes from the crown. No primocanes are produced from the roots (suckering). Prune primocanes in the summer to encourage branching and increase fruit production on floricanes. A trellis is required to support the canes. Semi-erect blackberries generally produce a higher yield than trailing or erect types. Fruit quality is similar to that of the erect blackberries.
Blackberry/red raspberry hybrids are generally natural crosses between blackberries and raspberries. Because the receptacle (white core) comes off with the fruit, they are generally considered a type of blackberry. Popular cultivars include Boysen (Boysenberry), Logan (Loganberry), and Tay (Tayberry).
PLANTING 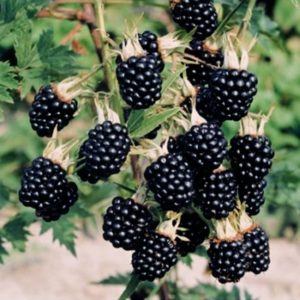 • Blackberries and hybrids are all self-fertile.
• Select a site that receives full sun if possible for best berry production.
• Soil needs to be fertile with good drainage. Add organic content to enrichen your soil.
• Make sure you plant your blackberries far away from wild blackberries that may carry viruses.
• For semi-erect cultivars, space plants 5 to 6 feet apart. Space erect cultivars 3 feet apart. Space trailing varieties 5 to 8 feet apart. Space rows about 8 feet apart.
• Plant shallowly: about one inch deeper than they were grown in the nursery.
• Planting may be done in late fall, however, it should be delayed until early spring in very cold areas as it could kill some hybrids.
Trellising and Pruning
Trellises should be constructed for blackberries.
• For trailing varieties, explore a two-wire system, running a top wire at five to six feet with a second line 18 inches below the top wire. After the first year, there will be fruiting floricanes along the wires. Train the new primocanes into a narrow row below the fruiting canes. Directing all canes in one direction may make it simpler.
After the fruit harvest period, the old fruiting (floricanes) are removed to the ground. However, unless there is a lot of disease, it’s best to delay removing the old fruiting canes until they have died back considerably. This allows the dying canes to move nutrient back into the crown and roots. After old fruiting canes are removed, train the primocanes up on the wires.mWork with one or two canes at a time in a spiral around the trellis wires. Canes from adjacent plants may overlap a little. No pruning of primocanes is necessary.
In areas with low winter temperatures, leave the primocanes on the ground for the winter where they could be mulched for winter protection.In the spring, after damage of extreme cold has passed, train the old primocanes (now floricanes) up on the wires. Avoid working with the canes in cold weather, as they are more prone to breaking.
•Erect blackberries produce stiff, shorter canes that come from the crown and root suckering (forming a hedgerow). A T-trellis works well to support erect blackberries.
Erect blackberries require summer pruning. Remove the top one to two inches of new primocanes when they are four feet tall. This causes the canes to branch, increasing next year’s yields. This will require several pruning sessions to tip each cane as it reaches the four foot height. Primocanes (suckers) that grow outside the hedgerow should be regularly removed.
In the winter, remove the dead floricanes (old fruiting canes) from the hedgerow. Also shorten the lateral branches to about 1½ to 2½ feet.
•Withprimocane-fruiting erect blackberries, cut all canes off just above the ground in the late winter for the best fruit. In the summer, when the primocanes are 3½ feet tall, removed the top 6 inches. The primocanes will branch, thereby producing larger yields in the fall.
•Semi-erect blackberries are vigorous and easier to manage on a Double T Trellis. Install four-foot cross arms at the top of a six foot post. Install a three-foot cross arm about two-feet below the top line. String high-tensile wire down the rows, connecting to the cross arms.
These berries need to be pruned in the summer. When the primocanes are five feet tall, remove the top two inches to encourage branching. This will require several pruning sessions to prune canes as they reach the height. In the winter, remove the dead floricanes (old fruiting canes). Spread the primocanes (new floricanes) out along the trellis. Canes do not need to be shortened. However, they can be if they are difficult to train.
•Mulchingis important throughout the season to conserve moisture and suffocate weeds. Keep a thick layer of mulch surrounding plants at all times.
•Waterone inch per week.
• The roots may keep sending up an abundant amount of shoots (canes). Keep order by pruning away the majority of them so that the survivors can produce lots of berries.
Pests/Diseases

• Raspberry Borers
• Fruit Worms
• Gray Mold
• Viruses
• If your plant is suffering from the blackberry disease known as Raspberry Bushy Dwarf virus, the leaves will be have some bright yellow on them, and the leaves of the fruiting vanes may have a bleached look in the summer. The disease known as Blackberry Calico will cause faint yellow blotches on the leaves of the plant.
Harvest/Storage
• Pick fruits regularly keeping the central plug within the fruit (unlike raspberries)
• Although fresh fruit is always best, blackberries can be stored by canning, preserving or freezing.
Recommended Varieties
• Early – ‘Brazos’ ‘Cherokee’ and ‘Comanche’
• Late – ‘Black Satin’ ‘Smoothstem’ and ‘Thornfree’
• Hybrid – ‘Boysenberry’ ‘Loganberry’ and ‘Marionberry’
Wit & Wisdom
Blackberries and strawberries are very high in ellagic acid which is an antioxidant that acts as a scavenger to help make potential cancer-causing chemicals inactive. Ellagic acid reduces the genetic damage caused by carcinogens like tobacco smoke and air pollution. They also contain other antioxidants that help lower cholesterol and ward off cardiovascular disease.