Introduction: – Pineapple is one of the commercially important fruit crops of India. It is one of the choicest fruit all over the world because of its pleasant taste and flavor. Pineapple is a good source of vitamin A and B and fairly rich in vitamin C and minerals like calcium, magnesium, potassium and iron. It is also a source of Bromelain, a digestive enzyme. In addition to being eaten fresh, the fruit can also be canned and processed in different forms. Total annual world production is estimated at 14.6 million tones of fruits. India is the fifth largest producer of pineapple with an annual output of about 1.2 million tones.

Pineapple varieties cultivated in different states of India: –
State Varieties mostly grown
Assam & other N.E. States Kew, Queen, Mauritius
Kerala Mauritius, Kew, Queen
West Bengal Giant Kew, Queen
Suitable Climate for Pineapple Farming: – Areas with a heavy rainfall are best for pineapple growth. Optimum rainfall is 1500 mm per year although it can grow in areas having 500mm to 5550mm of rainfall. Pineapple is suitable for cultivation in humid tropics. The fruit grows well near the sea coast as well as in the interior; so long the temperatures are not extreme. The fruit grows well near the sea coast as well as in inland, so long as temperature ranges from 15.5 to 32.50 C. Low successfully up to 1525m above sea level.
Suitable soil for Pineapple Farming: – Pineapple grows in almost any type of soil, provided it is free-draining. Slightly acidic soil with ph range of 5.5 to 6.0 is considered optimum for pineapple cultivation. The soil must be well drained and light in texture. Heavy clay soil is not preferred. It can grow in sandy, alluvial of laterite soil.
Land Preparation for Pineapple Farming: – The land is prepared for planting by plugging or digging followed by leveling. Depending on the nature of land, trenches of convenient length, about 90cm width and 15-30cm depth are prepared.
Best Season for Pineapple Farming or Plantation: – Pineapple is a humid tropical plant. It grows well, both in the plains and also at elevations not exceeding 900 meters. It tolerates neither very high temperature nor frost. Pineapple usually flowers from February to April and the fruits are ready from July to September. Sometimes, off-season flowers appear and they produce fruits in September-December.
Planting Material in Pineapple Farming: – Pineapple is usually propagated by sucker, slip and crown. These planting materials of 5-6 months age bear flowers after 12 months of planting except crowns which bear flowers after 19-20 months. Pineapple plants produced through tissue culture are also available for cultivation.
Spacing of the plants in pineapple Farming: – For commercial viability high density cultivation is recommended. Planting density of 63,400 plants/ha. (22.5 x 60 x 75 cm) is ideal for sub-tropical and mild humid conditions, whereas for hot and humid conditions a plant density of 53,300 plants/ha. Spaced at 25cm from plant to plant within a row, 60cm from row to row and 90cm from trench to trench (25x 60 x 90cm) provides high yield. In rain fed, high fertile and hilly areas in north eastern states, a somewhat lower density of 31,000 plants ha. Is recommended.
High Density Planting in Pineapple Farming: – The yield of 70-105 tonnes/ha may be obtained under high density planting. The increase in yield/unit area being 45-85 tonnes/ha less weed infestation, protection of fruits from sun burn, increased production of propagules (suskers and sloips)/unit area and non-lodging of plants area added advantages of high density planting.
Planting Method in Pineapple Farming: – Four Different planting systems viz. flatbed, furrow, contour and trench are followed. System of planting varies according to land and rainfall. In the slopes terracing or contour planting is adopted which helps to check soil erosion. Trench planting is usually followed in Kerala.
Intercultural Operations Pineapple Farming: – Ear thing up is an essential operation in pineapple cultivation aimed at good anchorage to plants. It involves pushing the soil into the trench from the ridge where trench planting is a common practice. As the pineapple roots are very shallow, the plants are eventually lodged especially under conditions of flat-bed planting in heavy rainfall areas.
Lodging of plants when the fruits are developing would result in lopsided growth, uneven development and ripening of fruits. This operation becomes more important in Raton crops, as the base of the plant shifts-up, crop after crop. High- density planting would minimize the necessity of this operation, as the plants prop each other preventing lodging.
Irrigation/Wate 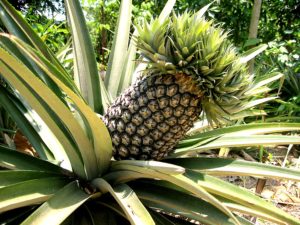 r supply in Pineapple Farming: – Pineapple is mostly cultivated under rain fed conditions. Supplementary irrigation helps to produce good sized fruits in areas having optimum rainfall. Irrigation also helps to establish an off- season planting to maintain its year round production. In case of scanty rainfall and hot weather, irrigation may be provided once in 20-25 days.
Insect pests and diseases in Pineapple Farming: – Pineapple is usually free from pests except infestation of mealy bugs and scale insects in sporadic cases. Diseases are not common except stem rot in case of pineapple. Control measures include good drainage and dipping the suckers in Boradeaux mixture before planting.

Manures, Fertilizer and Nutrient Management in Pineapple Farming: – Pineapple is a shallow feed with high nitrogen and potassium requirement. Since these nutrients are prone to heavy losses in the soil, practices relating to time of application and the form of fertilizer determine their efficient usage. Experts based on research trials conducted at a number of locations advise to give N and K20 at 12g each per plant. There is no need for P application. However, if the soils are poor in P,4 g of P205/plant can be applied.
Nitrogen should be applied in 6 split doses. The first dose of N can be given 2 months after planting and the last dose 12 months after planting. Potash should be given in 2 split doses. Entire P half the dose of K can be given at the time of planting and the remaining K, 6 months after planting. Application of fertilizer under rain fed conditions has to be done when moisture is available.
Harvesting and Yield: – In Pineapple Farming, Pineapple plants flower 12-15 months after planting and the fruits become ready 15-18 months after planting depending upon the variety, time of planting, type and size of plant material used and prevailing temperature during the fruit development. Under natural conditions, pineapple comes to harvest during May-August. The fruit usually ripens about 5 months after flowering. Irregular flowering results in the harvesting spread over a long period. In order to get uniform flowering (over 80%) in the main season, (Ethrel @ 100 ppm) solution is applied to plants one month before flowering.
The fruits are harvested for canning purpose when there is a slight change at the base of developing fruits. The fruits used for table purpose are retained till they develop golden yellow colour.
The plant crop after harvest can be retained as ratoon crop for three to four years depending upon the soil condition. Rationing in high density planting reveals that the average fruit weight in the first and second ratoon is 88% and 79% respectively of the plant crop. The plant stand is also reduced gradually resulting in the reduction of fruit yield by 49 and 46% (approx) in first and second ratoon crops respectively.
The average yield is 50-80 tonnes/ha depending upon spacing and cultural practices. Economic life of a pineapple plantation is expected to be around 5 years. After this the plot should be uprooted and replanted. 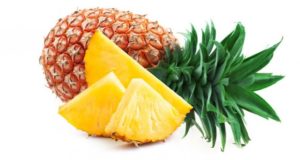 Marketing of Pineapple: – There is always a very good demand of Indian pineapple in the internal markets. It is in high demand from the processing industry as well. Indian pineapple is exported to Nepal, U.K., Spain and U.A.E. The main products of export are canned slices, tidbits, juice etc.