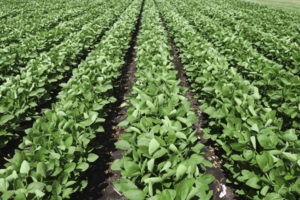 Introduction of Soybean: – Soybean is known as the “GOLDEN BEAN” and soybeans belong to the legume crop family and are basically native to East Asia. It is botanical name is “Glycine max” soybean is an exceptionally nutritive and very rich protein food. Soybean oil is one of the most popular edible oil used in India. Soya also used as milk product and available in the form of soya chunks which is also called “meal maker” in India.

Varieties of Soybean in India: – Some of the soybean varieties cultivated in India are listed below.

Agro-Climatic conditions for soybean farming: – Soybean thrives well in warm and moist climate. A temperature of 26 to 32° C appears to be the ideal for most of the varieties of soybean. Soil temperatures of 16° C or above support rapid germination and vigorous seedling growth in soybean farming. A lower temperature may cause to delay the flowering. Day length is the key factor in the soybean varieties as they are short day plants.

Soil requirement in soybean faming: – Soybean requires well drained and fertile loamy soils with a ph range between 6.0 and 7.5 are most favorable for its cultivation. Saline soils and sodic inhibit germination of soybean seeds. Water logging damages the crop, so it is mandatory to have good soil drainage in rainy season.

Seed rate in soybean farming: – Depending on the variety, on average, the seed rate varies from 16 kg/acre. Seed rate also depends on seed size, germination percentage, and sowing time.

Crop rotation in Soybean farming: – In soybean farming, mixed cropping Mandau, sesamum & maize has been found feasible and fetching more returns. In inter cultivation; plant row spacing of maize should be at 100 cm keeping plant to pant distance 10 cm and 3 rows of soybean in between maize rows. Soybean has excellent scope as an intercrop inter crop in cotton, arhar, and upland rice in north India. In sorghum, arhar, sugarcane, and groundnut.

Land selection and its preparation in soybean farming: – Land selection is very important in soybean farming as this will impact the overall production of soybean. The main land must not have been sown with soybean crop in the previous season to avoid volunteer plants that cause admixture. Land continuously cultivated with soybean may harbor wilt pathogen. So these kinds of fields must be avoided. By following the crop rotation, endemic, pathogen can be reduced. A soil with high organic matter defiantly helps in leading production of vigorous seed.

The field should be made into ridges & furrows of 1 feet wide or beds & channels of 4 feet X 6 feet depending on cultivation practices followed.

Seed selection in Soybean farming: – Soybean seeds used for sowing must be from an authentic source; Genetic purity is an important factor in selecting sowing seeds. Avoid diseased, immature, hard, damaged, shrunken seeds. Seeds selected for sowing should be also are vigorous for a good field stand.

Seed treatment in soybean farming: – To control any seed borne diseases, soybean seeds should be treated with carbendazim fungicide at 4g kg-l of seed.

Manures and fertilizers in soybean farming: – 10 cartloads (5 ton) of well decomposed compost (Cow dung or any farm yard manure (FMY) is spread along with basal application of 360 kg super phosphate, 40 kg urea and 50 kg muriatic of potash per acre. 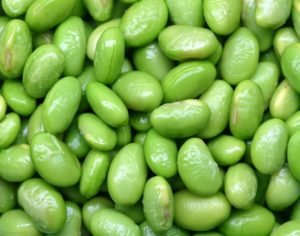 Weed control in soybean farming: – Immediately after sowing and watering, apply basal in weedicide by dissolving 2 ml in 1 liter of water. This spraying of weedicide must be done within 3 days of sowing. If done later, it can damage the soybean crop. Spraying of weedicide will control the early growth of weeds, to control later emerging weeds in the crop, manual weeding should be carried out after 2 weeks. Sometimes, the 600 ml of Basal in can be mixed with 20 kg of sand (4 iron Chat ties of sand) and evenly spread on the field within 3 days of sowing. This can reduce the cost of spraying.

Irrigation in soybean farming: – The soybean crop generally does not require any irrigation during kharif season. But, if there were any a long drought at the time of pod filling, one irrigation would be required. During rainy season, make sure crop soil has proper drainage to avoid the water logging. Spring crop would require about 6 to 7 irrigation.

Pest and disease control in soybean farming: – The major pest in soybean farming is Helios this which makes holes in young pods and eats the seeds. Collect the worms and destroy them or spray with Dimethoate Methyl demotion or Phosphomidan @ 2 ml/litre of water.

During the growing stages of the soy seed crop, incidence of will being observed. The affected plants with wilt will turn brown and die; these plants can be removed when they get noticed. The affected area of crop is sprayed using 0.1% Bavistin solution. Another common disease in soybean farming is “Powdery Mildew” it causes white powder deposits on the leaves. This disease can be controlled by spraying Dithane M 45 at the rate of 4 grams/Liter of water.

Harvesting of soybean: – The maturity of soybean crop period ranges from 50 to 145 days depending on the varieties used for cultivation. It should be an indication of maturity when the leaves turn yellow and drop and soybean pods dry out very quickly. There would be a rapid loss of moisture from the seed. At harvesting should be done by breaking the stalks on the ground level or hand, or with sickle. Threshing should be done with the mechanical soybean thresher.

Yield of Soybean: – Crop yield depends on the variety of seed cultivated. An average yield 18 to 35 quintal/ha can be expected.