The lotus flower has great spiritual significance in Buddhism and Hinduism. Though native to southeast Asia, it travels well and is a popular aquatic plant in tropical and temperate climates throughout the world. In China, lotus roots and stems are eaten fresh or dried.

The lotus falls under the Nelumbonacea family. Its scientific name is Nelumbo nuciferia. It is sometimes also known as Nymphaea nelumbo, due to the now discredited belief that it was part of the Nymphea genus, which includes many waterlilies. 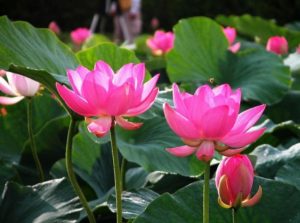 Lotuses are aquatic plants that sprout underwater. Its leaves rest on the water’s surface and the lotus blossom extends into the air. Lotuses bloom in a wide range of colors from white to purple, including pink and yellow. Lotus flowers have a pleasantly fragrant scent and are prized components of many water gardens.

According to ancient Buddhist and Hindu traditions, the lotus flower symbolizes:

This lotus flower meaning is thought to originate from the fact that the lotus grows up from the dark, muddy bottom of a pond to blossom as a brilliant, clear flower above the water’s surface. Despite its dark and murky origins, the lotus is clean and beautiful. Its beauty consists in separating itself from its dirty surroundings, just as a person seeking spiritual enlightenment must do.

Lotuses are aquatic plants and must be planted in a very wet environment. A common method of planting lotuses is to place them in a small container under 3-5 inches of soil, then submerge the pot entirely in at least 8 inches of water. The lotus will grow slowly underwater until at last it emerges from the water’s surface and develops beautiful leaves and blossoms.

Lotus plants thrive in partial sunlight (at least 4 hours per day) and prefer warmer weather, though they can withstand freezing temperatures as long as their bulbs are placed beneath the freezing point of their pond. They are perennial plants that can withstand a winter and emerge again in late spring or early summer. Most lotus plants should have the soil around them fertilized once a month.

As a plant that thrives in aquatic conditions, the lotus plant can withstand a great deal of flooding. 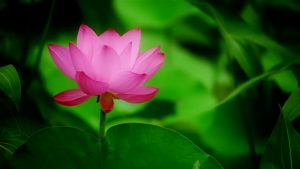 However, lotus flowers are susceptible to:

Many people buy lotus flowers for decorating thanks to their striking appearance and fragrant scent. Likewise, dried lotus seed heads have a dramatic appearance and are often used as structural components of flower arrangements.

Lotus seeds and tubers are edible, and many Chinese dishes use them as key components. In northern Chinese provinces, the roots are used mainly as vegetables in savory dishes, while in southern provinces they are eaten like fresh fruits. In some areas it is common to extract the starch from lotus plants and mix it with sugar and water to form a sweet, thick porridge. Wet lotus leaves may also be used to wrap steamed sticky rice or dumplings. In Korea, tea is sometimes made with dried lotus leaves or petals.

Traditional Asian medicine calls for using lotus roots to treat digestive complaints and fight infections. The flowers can be made into a thick syrup to soothe sore throats and suppress coughing.