Turmeric (Curcuma longa) is revered around the world as “the spice of life” and it is frequently used in a wide range of products including perfume, cosmetics, dyes and essential oils. Thai, Indian and Persian cuisines use turmeric for color and flavor, especially in curries. India is the main exporter of turmeric and although there are approximately 70 varieties of Curcuma longa found around the world, Madras turmeric and Allepey turmeric are the most well-known. Ayurvedic and Chinese medicines use curcumin, the active ingredient in turmeric, to alleviate arthritis, depression, diabetes, stomach ailments and inflammation. Studies are finding that turmeric may even prevent certain types of cancer.

The most commonly produced turmeric, Curcuma longa, is referred to simply as turmeric or Indian saffron. The U.S. and Britain regularly import Madras turmeric to spice curries, pickles, mustard and other foodstuffs. Madras turmeric is grown in the Tamil Nadu region of India and it is bright yellow in color.

Another popular variety is Alleppey turmeric, also called Alleppey Finger turmeric; this variety comes from the Kerala region of India and it is preferred by cooks because the powdered form has a flavor that is most similar to fresh turmeric. The Alleppey root is dark in color due to high concentrations of curcumin.

Lesser known varieties of turmeric are produced in different regions of India and are frequently named for the location where they are grown, such as Erode, Salem, Suvarna, Sudarshana, Suguna, Rajapore, Sangli, Nizamabad, Local Haldi, China-scented, Thodopuza, and Red-streaked turmeric varieties. 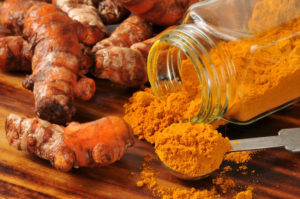 If you are looking for fresh turmeric, try your local international grocery stores or Asian markets. Turmeric root is best when it has a clean and unwrinkled appearance; like ginger, turmeric root looks shriveled as it loses freshness.

Purchase high-quality powdered turmeric for the best flavor and replace it often as the spice can get bitter and lose its flavor over time.

Indians have known the health benefits of turmeric for thousands of years. More recent studies have proven that the people of India were right in their use of turmeric for medicinal purposes. Grown in South Asia, this herb in the Ginger family (Zingiberaceae) was first known as Indian Saffron. The root system of bulbous rhizomes boiled and dried produces a product that is then ground into a powder. Turmeric has a peppery and somewhat bitter flavor, is deep yellowish orange in color, and is used to make curry.