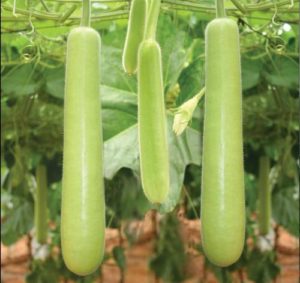 Bottle gourd is also known as “Calabash” or “lauki” and it belongs to family “Cucurbitaceae”. It is an annual climbing vine which has vigorous growth. The plant bears white color flowers which bears fleshy and bottle shaped fruits. The fruit is used for cooking purpose. There are also health benefits of bottle gourd. It helps in better digestion, reduces sugar level and constipation, cures insomnia and urinary infections and is good remedy for treating insomnia.

It is grown in variety of soils. It gives best result when grown in sandy loam to loamy soil.

Popular varieties with their yield:-

Punjab Barkat: Released in 2014. They have long fruits, light green in color and is cylindrical in shape. The variety is moderately resistant to mosaic disease. It gives an average yield of 226qtl/acre.

Punjab Long: Released in 1997. They have shining, cylindrical and light green color fruits. It has good long distance marketing quality. It gives an average yield of 180qtl/acre.

Punjab Komal: Released in 1988. It is an early maturing variety which gets mature in 70 days after sowing. It has medium sized fruit which is light green in color and bears 10-12fruits per vine. The variety is tolerant to CMV (Cucumber Mosaic Virus).  It gives an average yield of 200qtl/acre.

Punjab Bahar: It has round fruits and is green in color. It gives an average yield of 222qtl/acre.

Pusa Summer Prolific Round, Pusa Manjri (Sankar variety) and Punjab Round are the main varieties in round bottle gourd grown in Himachal Pradesh.

Pusa Summer Prolific round variety is used in Himachal Pradesh for round bottle gourd farming.

For bottle gourd farming, well prepared land is used. To bring the soil to fine tilth, ploughing followed by harrowing is done.

Time of sowing:
The optimum time for sowing is February-March, June-July and November-December month.

Seed rate:
Seed rate of 2kg is sufficient for one acre land.

Seed treatment:
Seed is treated with Bavistin@0.2% @3gm/kg to protect the seeds from soil borne fungus.

To control the weeds, 2-3 hoeings are required at the initial stages of plant growth. Weeding operations are carried out at the time of fertilizer application. Earthing up is also an effective way which should be carried out in rainy season.

Two to three hoeing is given to control the weeds during the early stage of bottle gourd growth. The monsoon or rainy season crop is normally stalked, often trained on a bower made of bamboos and sticks.

Disease and their control:- 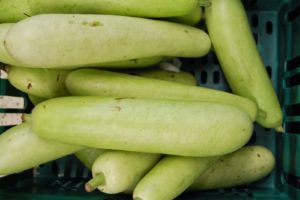 Depending upon variety and season, crop is ready for harvesting in 60-70days. Depending upon market requirement, medium and tender fruits are harvested. Mature fruits are mostly stored for seed production purpose. Cut the fruits from vines with help of sharp knife. In peak season, picking should be done in every 3-4 days.

Keep isolation distance of 800m from other varieties of sponge gourd. Remove diseased plants from the field. For seed production, the fruits are harvested when they get physiologically mature. Three field inspections are required for the production of true to type seed. After harvesting, fruits are dried and then seeds are extracted.