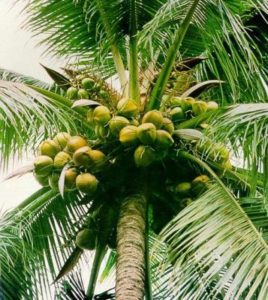 The coconut information that we present here just scratches the surface of all there is to talk about. We hope our few “tidbits” will give you a greater understanding of this wonderful treasure from the tropics!

If you go back hundreds to thousands of years, this tropical fruit was already well indoctrinated into the fabric of many cultures around the world. Many cultures throughout southeast Asia and the Pacific Islands revered it so much that they had certain customs that honored it regularly.In many places today these customs still remain.

When you think of a coconut palm, aren’t you immediately transported to the beauty and serenity of a tropical island?

The palm tree is certainly one of our planet’s reigning beauties but the fruit it produces is something undeniably special.

India is one place where special customs honoring the palm tree still survive.

Here is a land where the people revere the palm tree tree to such a degree that they consider it sacred.  Their name for it is the tree of heaven.

All parts of the fruit are eaten and used everyday. They wouldn’t think of cutting the tree down before its time or wasting any of its precious fruit.

It’s unlikely that the people of India have ever questioned this coconut information issue, but there are those who debate whether or not coconuts are actually a fruit, nut or seed.

Some folks believe the coconut to be a nut. Others think of it as a fruit and seed while a third group feel it fits into all three categories.

What do you believe? To find out, visit Is a coconut a fruit?.

As you may or may not know, the palm tree produces many edible and non-edible products.

The following are a few examples of edible product:

Here are some products that are non-edible:

Ever wonder how a coconut seedmatures?

You first must break through the tough outer coconut husk. When you succeed, what you find inside is the meat and water – a treasure trove of nutrition!

The seed is protected by this tough outer husk which is cleverly designed by nature. Until opened, everything inside is perfectly sterile and fresh.

On one of the ends of the husk are 3 holes that look like eyes. One of the eyes is where the germinated seed begins growing and eventually pops through.

About Coconut use in India: – Coconut plays a major role in the economy of India. Apart from the importance of copra and coconut oil which is widely used in the manufacture of soaps, hair oil, cosmetics and other industries products, its husk is a source of fiber which supports a sizable coir industry. The tender nut supplies coconut water, a popular thirst quencher of health and hygienic value which is a multi crore business all over India. Virgin coconut oil (VCO), extracted from fresh coconut kernel without any chemical processes is abundant in vitamins, minerals and anti-oxidants, thus making it the ‘mother of all oils’.

Climatic condition for coconut farming: – The coconut palm is found to grow under varying climatic conditions. It is essentially a tropical plant growing mostly between 20° N 20° S latitudes. However, a rainfall of about 2000mm per year, well distributed throughout, is ideal for proper growth and maximum production.

What kind of soil is suitable for coconut farming?

Coconut is grown under different soil types such as loamy, late rite, coastal sandy, alluvial, clayey and reclaimed soils of the marshy low lands. The ideal soil conditions for better growth and performance of the palm are proper drainage, good water-holding capacity, and presence of water table within 3m and absence of rock or any hard substratum within 2m of the surface.

Varieties of coconut breed: – There are only two distinct varieties of coconut, the tall and the dwarf. The tall cultivars that are extensively grown are the West Coast Tall and East Coast Tall. The dwarf variety is shorter in stature and its life span is short as compared to the tall. Tall X Dwarf (T X D), Dwarf X Tall (D X T) is the two important hybrids.

Preparation of soil for coconut farming: – Land size of the pit depends on the soil type and water table. In late rite soils large pits of the size 1.2m X 1.2m X 1.2m may be dug and filled up with lose soil, powdered cow dung and ash up to a depth of 60 cm before planting. In loamy soils, pits of size 1m X 1m X 1m filled with top soil to height of 50 cm are recommended. While filling the pits, two layers of coconut husk can be arranged at the bottom of the pit with concave surface facing upwards for moisture conservation. After arranging each layer, BHC 10% DP should be sprinkled on the husk to prevent termite attack. In late rite soils, common salt @ 2 kg per pit may be applied, six months prior, on the floor of the pit to soften the hard pans. 3.5.

Spacing between plants in coconut farming: – Spacing in general square system of planting with a spacing of 7.5m X 7.5m is recommended for coconut. This will accommodate 177 palms per hectare. However, spacing of 7.5 to 10m is practiced in various coconut growing regions of the country.

In coconut farming, spacing depends upon the planting system, soil type etc. In general the following spacing is recommended under different planting system in sandy and late rite soils.

Planting material and planting in coconut farming: – Planting material & planting Vigorous seedling which are one year old, having minimum of six leaves and girth of 10 cm at the collar level should be selected f 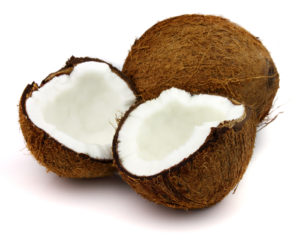 or planting in the main field. Early splitting of leaves in the seedlings could be a criterion for selecting good seedlings. However, 18-24 months old seedlings are preferred for planting in water logged areas.

In coconut farming, before planting the pits are filled up with top soil and powdered cow dug /compost up to a depth of 50 to 60 cm. Then take a small pit inside this, so as to accommodate the nut attached to the seedling. Plant the seedling inside this pit and fill up with soil. Press the soil well so as to avoid water stagnation. If there is chance for white-ant attack apply Sevidol 8G (5gm) inside the small pit before planting. In late rite areas apply 2 kg common salt per pit for improving the physical condition of the soil. Burying 25 to 30 coconut husks per pit in layers will be useful for moisture conservation.

Best Season to plant coconut palm: – Planting the seedlings during May with the onset of pre-monsoon rain is ideal time.

Manuring in coconut farming: – Regular manuring from the first year of planting is essential to higher productivity. For coconut 20-50 kg organic manure should be applied per palm per year with the onset of south west monsoon, when soil moisture content is high. Different forms of organic manures like compost, farm yard manure, bone, meal, fish meal, blood meal, neem cake, groundnut cake etc. could be made use for this purpose. In addition to this the following fertilizer Shedule iss recommended.

Inter cropping in coconut farming: – In coconut farming, to maximize the utilization of soil and sunlight in the coconut garden, inter cropping can be adopted with a variety of crops like pineapple, banana, elephant foot yam, groundnut, chilies, sweet potato, and tapioca etc. up to 8-10 years. During 10-22 years of age of the palms, crop like colossi which can tolerate shade can be cultivated. In older plantations, perennials like cocoa, pepper, cinnamon, clove and nutmeg can be grown as mixed crops along with inter crops. Mixed farming by raising fodder grasses such as hybrid Napier or guinea grass along with leguminous fodder crops in coconut garden has been found to be profitable which can support rearing of mulch animals.

Harvesting: – Coconuts are harvested at varying spans in a year. The frequency differs in different areas depending upon the yield of the trees. In well maintained and high yielding gardens, bunches are produced regularly and harvesting is done once a month. Coconuts become mature in about 12 months after the opening of the scathe. It is the ripe coconut which is source of major coconut products. Nuts which are eleven months old give fiber of good quality and can be harvested in the tracts where green husks are required for the manufacture of coir fiber. Economic life of the coconut plant is about 65 years.

Yield: -The yield depends on variety and conditions under which it is grown. The average yield per hectare varies from 10000 to 14000 nuts per annum.

Marketing coconut: -it is very easy to market as it has always in demand big product companies may buy or you market them to local whole sale dealers.

Bottom Line: – Coconut farming is beautiful and is rally profitable farming. Depending on the yielding, your land value goes up in open market.