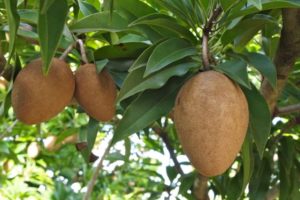 It is native to Mexico and other native countries of South America. It is commonly known as Chiku and it is mainly cultivated in India. It is mainly used for the production of latex which is used for the preparation of chewing gums. In India, it is mainly grown in Karnataka, Tamil Nadu, Kerala, Andhra Pradesh, Maharashtra, and Gujarat. Sapota is cultivated in 65thousand acre of land and gives an annual production of 5.4lakhs metric tonnes. Its fruit is berry which contains 3-5 black shining seeds.

It is grown in variety of soil but deep alluvial, sandy loam soil and black soil having good drainage are ideal for doing sapota farming. pH having 6.0-8.0 is optimum for sapota farming. Avoid cultivation in shallow clayey soil and in high calcium content.

Cricket Ball: Developed in 2011. It is famously known as Calcutta Large, large round fruit, grainy flesh, and not much sweet. It gives an average yield of 157kg/tree.

Pot Sapota: Fruiting starts in the pot, small fruit which is egg shaped and having a sharp top, fruit is very sweet and aromatic.

Calcutta Round, Pala, Vavi Valsa, Pilipatti, Murabba, Baharu, and Gandhevi are also the varieties grown in other states.

For sapota farming, well prepared land is required. To bring the soil to fine tilth, ploughing is done 2-3 times followed by leveling.

Time of sowing:
Planting is mainly done in February to March and August to October month.

Spacing:
Spacing of 9m is used for planting.

Depending upon climate and irrigation facilities, intercropping with pineapple and cocoa, tomato, brinjal, cauliflower, peas, cucurbits, banana, papaya can be done.

Moth (Leaf Webber): The symptoms are the dark brown color patches are seen on the leaves. It ultimately leads to withering and drying of tree branches.

Bud worm: They are moth caterpillars which destroy the vegetative buds by feeding themselves on it.

Treatment: Spraying of [email protected] or fame 20ml in 150 ltr of water per acre is done
Hairy caterpillar: They destroy the plant by feeding themselves on new shoots and twigs.

Treatment: Spraying of [email protected] in 150 ltr of water per acre is done.

Disease and their control:-

Leaf spot: Deep purplish brown color spots which are white from the center and are round in shape are seen. Long spots are seen on the stem of fruits and petals.

Treatment: Spraying of copper [email protected] per acre is done.

Heart rot: It is a fungal disease that causes the decay of wood at the center of the trunk and branches.

Anthracnose: On stem and branches, deep sunken wounds of canker are seen and on leaves, brown color stains are seen.

Treatment: Spraying of copper oxychloride or [email protected] per 150ltr water is done to get rid of anthracnose.

Weed control in Sapota farming: - Weeds should be regularly removed from the basin. In young plantation pre emergence application of Bromacil 2kg a.i/hectare or Diuron 2kg a.i/hectare has been found effective in controlling the weed population for 10-12 months.

Harvesting is done in July-September month. But keep in mind not to harvest unripe fruits. Mainly harvesting is done when fruits are having to fade orange or potato color and fruits having a less sticky milky color product and it is gets easily plucked from the tree. Mainly 5-10 years old tree gives 250-1000 fruits.

After harvesting, grading is done and then storage is done at 20oC temperature for a period of 7-8 days. Storage life can be increased for 21-25 days by removing ethylene and adding CO2 @5-10% in the storage atmosphere. After storage packing is done in cardboard boxes and is used for long distance transportation.