Cypripedium calceolus is widely distributed, ranging from Spain, the British Isles and Scandinavia in western Europe across to north-eastern China, eastern Siberia and Sakhalin Island. It may also occur on Honshu in Japan. 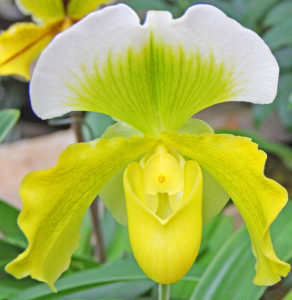 The lady’s slipper orchid is a long-lived herbaceous perennial which produces new growths from a rhizome (swollen underground stem) each season. It grows up to 60 cm tall, and the stems have a covering of glandular hairs. Each stem has three to four leaves, which are strongly pleated and often have upcurved sides. The leaves can reach 18 cm in length and 9 cm in breadth. The inflorescence (flower stalk) is one- to two-flowered with leaf-like bracts. The flowers are showy. The sepals and petals are maroon (rarely green) and often spirally twisted. The sac of the slipper-like lip is yellow, and spotted inside with red. It is related to C. macranthos and can form hybrids where the species occur together in the eastern part of the range of C. calceolus.

Cypripedium calceolus is quite variable in the wild. Plants may bear up to three flowers on a spike. Flowers can have green or yellow, rather than maroon, sepals and petals and a white, rather than a yellow, lip.

In England, Cypripedium calceolus was never common and was over-collected to the point of almost being extinct by the first half of the twentieth century. It clung on at one site, and has since been successfully propagated and reintroduced. Elsewhere, it ranges from being extremely rare (for example in Denmark) or extinct (for example in Greece) to occurring in relatively large populations (for example in Poland and Austria). It serves as a flagship species for plant conservation in many of the countries in which it occurs.

This species was collected to the brink of extinction in Britain. When a single plant was rediscovered, a group of interested individuals and organisations formed the Cypripedium Committee, to guard the remaining plant and develop a conservation strategy.

After several years of protection from further damage, the wild plant recovered some of its vigour and started to flower again. The flowers were hand pollinated, and the resulting seeds were then sent to Kew.

Orchid seeds are tiny and dust-like, and have stringent requirements for germination, and Cypripedium calceolusis no exception. In the Micropropagation Laboratory at Kew, the seeds were sterilised in a weak bleach solution and sown onto sterile agar jelly in Petri dishes, with nutrients added. These initial attempts at propagation were unsuccessful.

Finally, success was achieved when seeds were collected before they were fully developed. The seeds were collected between 40 and 50 days after pollination, and sown onto an agar medium developed by Svante Malmgren, containing amino acids, vitamins and pineapple juice. The seeds were then placed in the dark. Almost all the seeds germinated within two months of sowing. This method is now used routinely for the germination of Cypripedium seeds.

When the seedlings have a shoot and two roots, they are moved into honey jars containing the same agar medium. Then, after one or two years in the laboratory, the plantlets can be grown on in pots. Various types of pot have been tried at Kew, and plastic, five-inch, 1/2 pots are currently used.

A variety of compost mixes have been tested. Compost containing loam helps retain water and organic components may support fungi, which are thought to provide nutrients for the plants. The pots are usually checked twice a week to see if they need watering. Rainwater is best, and less water is needed in winter. Plants thrive best when planted out in a suitable compost under light shade in a woodland garden.

Kew and Natural England are working together to reintroduce seedlings into locations where the species has died out. Some reintroduced plants have flowered and in 2009, seed pods formed after natural pollination by insects. 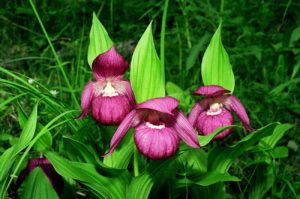 The lady’s slipper orchid has been in cultivation since at least 1731, when there is a record of Philip Miller growing it at the Chelsea Physic Garden. It has a reputation of being difficult to grow for any length of time. At Kew, following experimentation in our micropropagation laboratory, we have managed to successfully propagate the plant and have developed a method of germination which is now routinely in use.

The plants can be grown outside in cold frames, and benefit from a cold winter. Cypripedium calceolus is a woodland species, and does not demand strong light, and so it can be grown on the north side of a building. If grown in a cold frame it should be covered by shade cloth in the summer. The plants are dormant over winter and in leaf over summer, and flowering begins in May.

This species is susceptible to aphids, which can transmit viruses to the plant. Other pests include slugs and snails, which particularly enjoy orchids, and small rodents and birds that sometimes disturb pots.

Orchids in the lab

Lady’s slipper orchids are common across the Americas, and also in Europe and temperate and eastern Asia, south to the Himalayas. However, by the early 1980s, the British lady’s slipper, Cypripedium calceolus, was down to a single flowering individual in the wild. Over-collecting by orchid enthusiasts and the disappearance of suitable habitats had seen numbers dwindle to the edge of extinction, so in 1983 Sir Robert and Lady Sainsbury funded a project at Kew’s micropropagation unit to try to improve techniques for growing wild orchids in artificial conditions.

Orchids often grow in cooperation with fungi called ‘mycorrhizal fungi’, which produce the nutrients the plant needs. In return, the orchid will later share food it has made by photosynthesis – something the fungi cannot do. The problem with growing orchids in the lab is identifying the right fungi for any particular orchid, which can be difficult. In many cases, the fungi are actually essential for germinating the seed of the orchid.

The most usual technique is to take some cells from the roots of actively growing orchid plants, as the fungi actually grow inside the roots. However in some cases, no appropriate fungus could be found. This was true for the British lady’s slipper. But luckily, trial and error revealed that sowing immature seed from green capsules produced good results without the right fungi, especially if the seed trays were chilled after seeding.

The tiny seeds were sown into a layer filled with amino acids and mineral salts that the plants would need to grow, and then were kept in huge fridges to maintain the cool temperature, which seems to be necessary. Thousands of seedlings have now been raised so that the little plants can be planted out in the wild. The locations of these plantings remain secret in the hope of protecting the young seedlings from collectors. They are guarded by volunteers who are also trained in techniques of pollination, to ensure as much seed as possible is produced from the mature plant for the future.

There are fifty species of wild orchid growing in Britain, about a third of which are listed as threatened. Nature conservation organisations are keen to preserve orchids, which are some of our most spectacular wild flowers. So Mike Fay of Kew’s Jodrell Laboratory and his team have been using DNA fingerprinting to look at the question of which orchids exactly are growing wild in the UK, and which should be top priority.

But their DNA analysis has revealed some interesting problems for orchid conservationists. Mike Fay and his team looked at the early purple orchid, Orchis mascula, and DNA evidence from the plants’ chloroplasts suggests that there are two distinct groups of early purple orchids in the UK. The main UK population is closely related to plants in Brittany and Normandy, just across the channel. But the populations that grow in the south-west of England are more closely related to early purple orchids in Portugal and Spain than they are to French plants. So, the UK populations would seem to have come to these islands in two separate migrations. Conservation organisations can now set their targets to reflect the fact that there are two gene pools which need conserving, not just one.

Research like this can help conservation organisations concerned with wild orchids set much more useful targets for their work and can aid them to think about how to set their priorities for the future. 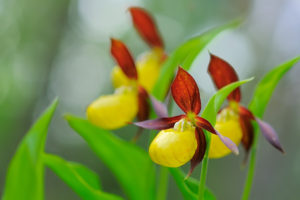 Lady’s slippers or slipper orchids comprise only a small fraction of the world’s orchid flora: some 180 species out of a total of 25,000 species. However, this charismatic group has attracted the interest and passion of many of the leading orchid growers and scientists for the past 150 years or more.

I was first attracted to lady’s slipper orchids when I was appointed as Kew’s representative on the Nature Conservancy’s (now English Nature) Cypripedium Committee, a group of ten people who looked after the sole remaining native plant of Cypripedium calceolus ‘somewhere in the North of England’. From that point on, now over 35 years ago, I was hooked and have studied and searched for these elusive orchids all over the world, from the south-west Pacific islands of New Guinea and the Solomon Islands, throughout south and south-east Asia across to the tropical Americas, Mexico and North America.

Despite their popularity, the discovery of new species of orchid continues at a steady rate of about two per year, especially in the Far East and in the tropical Americas. Some have proved to be sensational plants, amongst the most spectacular of all orchid species.

This has kept the profile of slipper orchids high in the horticultural world. Since slipper orchids tend to grow in very specific habitats and in small colonies, rarely exceeding a thousand plants, their horticultural popularity has made them amongst the world’s most threatened plants. Even today new species are almost exterminated as soon as they are discovered.

Scientific knowledge of slipper orchids has also grown dramatically in recent years since the advent of DNA analysis. We now understand the evolutionary relationship of the slipper orchids themselves, their relationship to other orchids (indeed, some doubted if they were orchids), and their antiquity. Field work has elucidated their life cycle, pollination biology and population biology.

The regenerative power of some over-collected species in the wild, together with recent advances in the propagation of slipper orchids from seed and the ease with which many can be cultivated, suggests that the future of some of the rarer species is not as bleak as was once thought.

Kew’s Millennium Seed Bank Partnership aims to save plant life worldwide, focusing on plants under threat and those of most use in the future. Seeds are dried, packaged and stored at a sub-zero temperature in our seed bank vault.