Oil seeds: – Oilseeds constitute a very important group of commercial crops in India. The oil extracted from oilseeds form an important item of our diet and are used as raw materials for manufacturing large number of items like paints, varnishes, hydrogenated oil, soaps, perfumery, lubricants, etc. Oil-cake which is the residue after the oil is extracted from the oilseeds, forms an important cattle-feed and manure.
India has the largest area and production of oilseeds in the world. Five major oil seeds viz., groundnut, sesamum, rapeseed and mustard, linseed and castor seed occupied 212.24 lakh hectares (2002-03) which is over 15 per cent of the net area sown. 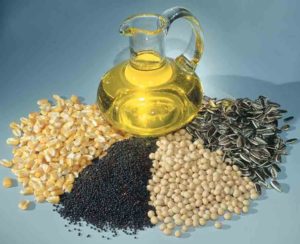 If the area occupied by other oilseeds such as soyabean, cotton seed, sunflower, safflower and nigerseed is also included, the total area occupied by oilseeds becomes about 20 per cent of the net area sown. It must, however, be noted that the production of oilseeds has always fallen short of our demand and there has always been a need to import oilseeds or their products for meeting the demand of our ever-growing population.
With limited scope of bringing additional area under oilseeds, increase in oilseed production will have to come primarily from land saving to technologies highlighting a combination of high yield plant type, standard crop management practices and balanced crop nutrition.
There have been large scale regional variations in area, production and productivity changes in oilseeds. Only a few states like Haryana, Madhya Pradesh, Rajasthan and West Bengal increased their oilseed production both through area expansion and productivity improvement.
States like Maharashtra, Tamil Nadu and Himachal Pradesh increased their oilseed output mainly through productivity improvement. In some states like Orissa, area productivity and production declined sharply.