Pulses are considered as a principal source of protein in India. In fact, India is the largest producer as well as the consumer of pulses. Pulses comprise of a major source of protein for people, as meat is too pricey for most the population. Pulses contain around 25% protein, twice the protein contained by wheat and thrice the amount in rice. The protein content in pulses is also easily digestible. Pulses are also significant in nutritional and health benefits. Pulses are also easy to store and can be kept over a long period of time.
Types of Indian Pulses:-
Pulses include Grams (Chana), Arhar or Moong Dal, Black Gram (Wad), Lentils (Masoor) and Peas (Matar). Moreover there are other sub-varieties like Whole Red and Red Split Lentils, Chick Peas (Kabuli Chana), Red Kidney beans (Rajma), Green Mung and Mung Split Dal, Chawli, Whole pigeon peas (Tur), Black Eye Beans, Black Matpe and Split Matpe (Urad Dal), Moth Dal, Yellow Millet and many other varieties. They are grown all over the country, excluding areas with profuse rainfall. These are again predominately rain-fed crops. Being leguminous, these plants help in re-establishing this facility of the soil and are, hence grown in alternation with other crops.
In India, Gram is the major pulse and occupies around two-fifths of the total area under all the pulses. Gram is basically raised as a Rabi crop, particularly in those areas that receive rainfall less than 10 cm during the winter season. At times, gram is sown mixed with wheat and it is basically the crop of central and northern India. Other pulses like Tur, Urad and Moong are grown as Kharif crops almost in every part of the country. In northern India, Khesari and Masoor are raised as Rabi crops in northern India. These crops are leguminous and they fix atmospheric nitrogen in the soil. Thus, they are usually rotated with other crops to maintain fertility of the soil. The support prices should also be evenly captivating. Even so, the only optimistic change is the introduction of a short duration third crop of Moong and Urad, which can be grown as post-Rabi crop. Situation can be bettered if new varieties of seeds can be developed, increasing their yield.
The two most important pulses grown in India are- 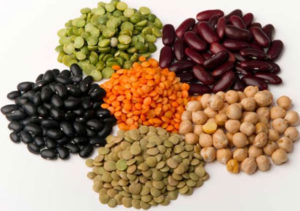 Gram:-
It is usually grown in those areas where the winter season is slightly cool and rainfall during the growing period is scarce. Gram is raised in north western states mainly Madhya Pradesh, Haryana, Uttar Pradeshand Rajasthan.
Tur:-
Tur is the second most important pulse after Gram. It is basically a Kharif crop. Soils, which are liable to water logging, are not suitable for raising Tur. This pulse is generally raised on low banks of earth dividing the rice fields. Madhya Pradesh, Uttar Pradesh and Maharashtra are considered as Tur producing states of India.
Other than these, Masoor and Moong are also widely used through out the country.

Masoor:-
Red lentils or Masoor Dal contains high protein and have significant nutritional value. Masoor Dal is also low in price and cost effective.
Moong:-
Moong Dal or Green Bean is mainly found in the Indian subcontinent and is the seed of Vigna Radiate. Moong Dal is basically oval shaped and green coloured and contains around 23% protein. It also contains Vitamins, Calcium, and Carbohydrates etc.
Hence, the Pulses occupy a huge area in India and production of Rabi pulses is nearly double that of Kharif crops.