Introduction of Spinach farming: – Spinach is one of the perennial leafy vegetable and grown throughout the world. Spinach has an excellent nutrition values and health benefits. Farmers can grow this crop in greenhouse, poly house and hydroponic system as well. Spinach can be gown for daily use in pots, containers, back yards. Spinach belongs to the family of “Amaranthaceous” and genus of Spinach. Spinach is thought to have originated in ancient Persia as a wild plant (modern Iran and neighboring countries). Spinach is native to central and western Asia. When it comes to the spinach plant characteristics, it is an annual plant and grows up to 30 cm tall in height. The spinach leaves are alternate. Simple, ovate to triangular and very variable in size from about 2 cm to 25 cm long and 1 cm to 4cm broad, with larger leaves at the base of the spinach plant and small leaves higher on the flowering stem of the plant. The spinach flowers are inconspicuous, yellowish-greenish, 3 mm to 4 mm in diameter, maturing into a small, hard, dry, lumpy fruit cluster 5 mm to 10 mm across containing several seeds. Following best farming methods and choosing right commercial/hybrid variety will be success factor in spinach farming.
Health benefits of spinach: – 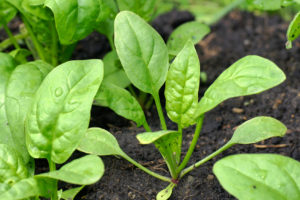 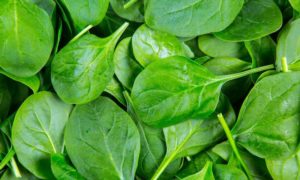 • Control measures: Practice good weed management around the spinach plants; insecticide applications are generally not effective at preventing the disease but can prevent secondary spread to neighboring lands.
• Aphids, Peach aphid, Potato aphid: – Small bodied insects on underside of spinach leaves which are usually green or yellow in color, but may be pink, brown red or black depending on species and host plant; if aphid infestation is heavy it may cause leaves to yellow, necrotic spots on leaves and/or stunted shoots; aphids secrete a sticky, sugary substance called honeydew which encourages the growth of sooty mold on the plants.
• Control Measures: – If aphid population is limited to just a few spinach leaves or shoots then the infestation can be pruned out to provide control; check transplants for aphids before planting; use tolerant varieties if available.
• Wire-worms:– If wireworms are known to be present in soil fallow field during summer and till frequently to reduce numbers; rotate to non-host crop where possible; avoid planting susceptible crops after a wireworm infestation on cereals without either fallowing of applying appropriate pesticide.
Harvesting in spinach farming: – Spinach will be ready for harvesting in an about 4 to 5 weeks after sowing of spinach seeds. Subsequent cutting should be taken at an interval of 20 to 24 days depending upon variety and season. It is recommended to harvest early in the morning because there is due on the crop. After harvesting spinach leaves should be washed off and trimmed. To market the spinach, the leaves should be graded and bunched based on quality.
Yield in spinach farming: – Well, crop yield depends on the variety and farm management practices. Usually, an average of 60 to 80 quintals of green leaves per hectare land can be expected in spinach farming.
Marketing in spinach farming: – Make the bundles and transport to local markets before they start producing seeds.