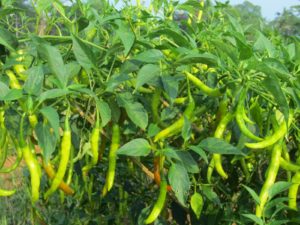 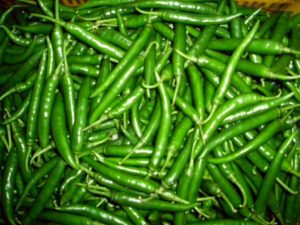 Disease control in chili farming: – Fruit rot & Die back caused by colletotrichum capsici and bacterial wilt are the two major diseases in chili farming. Bacterial leaf spot, powdery mildew and mosaic disease (caused by virus) are the major diseases of chili. Careful seed selection and adoption of phytosanitary measures will check the diseases of chili. Early removal of affected plants will control the spread of the disease. Seed treatment with Trichoderma takes care of seedling rot in nursery. Varieties tolerant to diseases should be used wherever the disease should be used wherever the disease is severe. Roughing and destruction of affected plants help in checking the mosaic virus. For effective disease control, 10 g of Trichoderma or Pseduomonas sp. Per litre of water should be used for spraying.
Growth phases in chili farming: – The crop duration of chili is about 150-180 days depending on variety, season and climate, fertility and water management. The growth of chili comprises of vegetative and reproductive phases. In general, the vegetative phase in chili extends to 75-85. Days followed by 75-95 days of reproductive phase. The vegetative phase is characterized by increase in plant height with profuse branching. Heavy branching is preferred for better aeration and sunlight infiltration into the canopy over compact varieties. This also helps in preventing fruit rot. Flowering starts from 80-85 days of the crop or 40-45 days after transplanting. Chili plant is an often cross pollinated crop with 50% of natural crossing. For fruit development and maturity about 40 days time is required after a thesis and pollination.
Harvesting of chili: – Chili is highly perishable in nature. It requires more attention during harvest, storage and transportation. Harvesting should be done at the right stage of maturity.
• Chilies which are used for vegetable purposes are generally harvested while they are still green but full grown.
• Chiles are harvested at red stage for caning purpose. Chilies used drying is harvested at full ripe-stage which can be turned into chili powder.
Yielding of chili: – The yield varies according to the system of cultivation. The yield of dry chilies of rain fed crop is 200-400 kg and that of irrigated crop is 600-1000 kg per acre. The proportion of dry to fresh japed chilies varies from 25 to 40 percent.