Introduction and Importance of Garlic: – Garlic is one of the important bulb crops. It is used as a spice or condiment through India. The compound bulb of garlic consists of several small bulb lets or cloves. Garlic is generally cultivated in A.P, U.P, Madras and Gujarat. Scientific experiments have shown that certain compounds in garlic will help the Heart functioning. Garlic is said to contain antibiotic substances that inhibit the growth of certain bacteria and fungi.
Best soil for garlic farming: – Garlic can be grown in different types of soil. However, sandy, silt and clay loam are recommended for commercial production. The soil should be fertile, rich in organic matter, well drained, and capable of holding adequate moisture during the growing period.
Climatic requirements for garlic faming:– Garlic grows favorably in areas with Type I climate, which is characterized by a wet season that usually occurs from May to October and a dry season from November to April. Garlic does not grow well in areas with excessive rainfall.
Land preparation for garlic farming: – The two types of land preparation for garlic farming are with tillage and without tillage or zero tillage.
With tillage: – This method of land preparation for garlic is similar to that for corn, soybean, and other upland crops. The field is plowed and harrowed twice or more at seven days interval or less. A tractor-mounted rotavator can also be used.
Without tillage: – This method of land preparation is usually practiced in the lowland rice fields after the harvest of palay. Rice straw and weeds are cut closed to the ground. If the soil is too wet, the field is allowed to dry until the desired moisture level is attained. Canals are usually constructed around the paddies to ensure no standing water after heavy rain or irrigation.
Improved varieties of Garlic: – Fawari, Rajli Gaddi, G-41, Selection-2, Selection-10, Garlic-9 Allium Sativum):
Godavari: – Developed by selection from Jamnagar collection and released in 1987. Bulbs are pink in color and medium in size with 25-30 cloves per bulb. It is tolerate to eriophyte mites. Duration is 130-140 days. Duration is 130-140 days. Average yield is 150 quintal per hectare.
Sweta: – Sweta is developed by selection from a local germplasm collected from Gujarat and released in 1987. Bulbs are medium in size with 20-25 cloves per bulb of white color. Duration is 120-130 days. Average yield is 130 quintals per hectare. 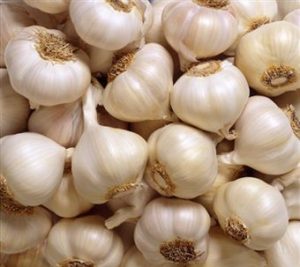 Seed rater and Time of sowing in Garlic farming: – In garlic seed rate is 315 to 500 cloves per ha. It taken in Rabi season and summer season. Crop is planted from August-November.
Planting Materials in Garlic farming: – Fully-matured and well developed bulbs of medium to-large cloves should be selected as planting materials. These should be free from diseases and mechanical damage. A hectare of land will require about 400-700 kg of seeds depending on the size of the bulbs and the distance of planting.
Clove/Seed preparation in garlic farming method: – The planting material is prepared first by separating the clove from one another. The clovers from the outer parts of the bulb are the best planting material. Large bulbs contain 10-14 cloves. When there is a shortage of planting materials, the inner cloves can be used also but these should be separated from the outer cloves. The planting materials are then soaked in an insecticide-fungicide solution for at least two hours to get rid of seed-borne pests and disease. The cloves are air-dried before planting.
Best season of planting: – In garlic farming, planting for garlic varies in different regions. In rain fed upland areas, planting is usually done during the early part of September. In other lowland areas, planting is from October to November. December planting tends to produce smaller bulbs especially in the latter parts of the month due to infestation of thrips and mites, and the bulbs are sometimes affected by early rain.
Planting distance in garlic farming: – The distance of planting varies from 15 cm X 15cm to 20 cm X 10 cm to 25 cm. Planting is done using dibble or pointed stick to insert two thirds of the length of the clove vertically into the soil or about 2 cm to 3 cm deep.
Mulching in Garlic farming: – Mulch can be applied before or after planting. Mulch is evenly laid on the field with a thickness of 3-5 cm. Rice straw is commonly used as mulching material in the Philippines. Other mulching materials that can also be used are hulls, saw dust, grasses, and polyethylene or plastic sheet. Mulch controls soils moisture as well as the growth of weeds.
Interculture operation in garlic farming: – First interculture is given with hand or khurpi one month after the sowing. Second weeding is given one month after the first weeding and hoeing. According to Joshi (1961) Hoeing, the crop just before the formation of bulbs about 2 ½ months from sowing) looseness the soil and helps in the setting of bigger and well filled bulbs. The crop should not be weeded out or hoed at a letter stage because this may damage the stem and impair the keeping quality of sprouting and the cloves already formed.
Irrigation/Water supply in garlic farming: – In preparation for planting, if soil moisture is not sufficient, it is necessary to irrigate the field a day or two days earlier. In case the soil becomes too wet after irrigation, the field should be allowed to dry until the desired moisture level is attained. This condition is best exemplified when footprints are deep enough. Garlic produces an average of 7 roots per plant. In clay loam soil, the roots dig down as deep as 59 cm. Sufficient moisture is essential within the root zone during the vegetative growth. The frequency of irrigation depends on the soil type and on the rainfall during the growing period. Clay loam is irrigated thrice. Sandy soil requires a more frequent irrigation. Flash irrigation can be applied when crevices or cracks on clay loam soils appear. Water should never be allowed to stay in the field beyond six hours. Irrigation starts before planting and ends 70-85 days after planting.
Manures and fertilizer in garlic farming: – 25 to 30 cart load of well rotten FYM or compost applied at the time soil preparation per hectare. In garlic according PKV, Akola recommendation 50 kg N, 50 kg P2o5 and 50 kg K2O should be applied. A side dressing of 50 kg N may be given one month after sowing.
Pests and disease control in garlic farming: – Thrips (Thrips sp.). Both nymphs and adults feed on the plant. They suck the sap of the plant from younger leaves to the growing points. The older leaves become withered or blasted in appearance.
Control – the thrips population is at its peak usually from late January to March. In areas with thrips infestation, early planting, possibly in October, is recommended. Burning of infested leaves and spraying of chemicals such as Malathion, fipronil, ethion and the like are among the recommended controls.

Mites (Aceria tulpiae): – The pest is either seed borne or mulch borne. The affected plants become twisted and distorted with yellowish or pale green streaks on the leaves. The leaf blade may not emerge readily from the cloves and the leaves separate poorly after emergence. The damage is called “tangle top”.
Control: – For piece treatment of seeds, apply chemicals recommended for the control of mites.
For field infestation, apply the recommended chemicals as early as the sign of infestation appears and repeat at seven to 10 days interval until the pest is controlled.
Harvesting and yield of garlic: – Garlic is crop 4 ½ to 5 months duration. When the leaves start Turing yellowish or brownish and show signs of drying up usually about a month or so for the emergence of seed stalks, the crop is ready for harvest. The plants are then pulled out or uprooted with a country plough and are tied into small bundles, which are then kept in the field or in the wade for 2-3 days for curing and drying so that the bulbs become hard and their keeping quality is prolonged. The bulbs may be started by handling them on bamboo sticks or by keeping them on dry sand on the floor in well ventilated room on dry floor. In garlic 50 to 70 quintal/ha yield is obtained.