The Indian poultry industry has undergone a paradigm shift in structure and operation. A very significant feature of India’s poultry industry is its transformation from a mere backyard activity into a major commercial activity in just about four decades which seems to be really fast. The kind of transformation has involved sizeable investments in breeding, hatching, rearing and processing. Indian farmers have moved rearing non-descript birds to today’s rearing hybrids such as hyaline, shaver, and Babcock which ensure faster growth, good livability, excellent feed conversion and high profits to the rearers.

The Indian Poultry industry has grown largely due to the initiative of private enterprises, minimal government intervention, and very considerable indigenous poultry genetics capabilities, and support from the complementary veterinary health, poultry feed, poultry equipment and poultry processing sectors. India is one of the few countries in the world that has put into place a sustained specific pathogen free (SPF) egg production project. 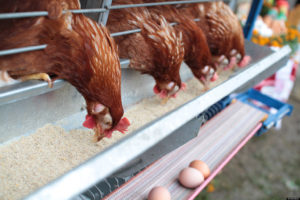 An Indian poultry development another aspect is that it has significant variation in the industry across regions. As for the egg production in India by the states during 1998-99: the four southern states Andhra Pradesh, Kanataka, Kerala and Tamil Nadu account for about 45% of the India’s egg production, with a per capita consumption of 57 eggs and 0.5 kg of broiler meat. The eastern and central regions of India account for about 20% of egg production, with a per capita consumption of 18 egg and 0.13 kg of broiler. While the northern and western regions of India record much higher figures than the eastern and central regions with respect to per capita availability of eggs and broiler meat.

The organized sector of Indian poultry Industry is contributing nearly 70% of the total output and the rest 30% in the unorganized sector. Broiler industry is well dominated by the southern states in our country with nearly 60-70% total output coming from these states. The layer industry once again is represented more in southern states especially, Andhra Pradesh, Tamil Nadu and Maharashtra producing nearly 70% of the country’s egg production. India’ 75% of egg produce is consumed by the population of 25% living in urban and semi-urban areas. Presently about 800 hatcheries are operating in India today.

Today India is the world’s fifth largest egg producer and the eighteenth largest producer of broilers and its per capita consumption of such products is poor-37 eggs and 1 kg of poultry meat per capita per annum. The growth of the poultry industry in India is marked by an increase in the size of the poultry farm. In past year broiler farms had produces on average a few hundred birds (200-500 chicks) per cycle small unit are probably finding themselves at problem because of high feed and transport cots, expensive vaccines, and veterinary care services and the non-availability of credit. Some small units are reported to be shifting from layer to broiler production because output in broiler unit can be realized in six weeks. India is the fifth largest producer of egg and ninth largest producer of poultry meat. India was well positioned as 17th in the world poultry production. The Indian poultry production is considered to be the cheapest in the world. The main factors of rising production in country are:

There is an overwhelming response from all segments concerned and related with poultry. There is a 100% increase in space compared to earlier years. In a continual endeavor and efforts to create a strong platform for poultry India is experimenting with new trends in poultry rearing techniques and innovations for processed chicken meat, medicines, feed additives, health products, equipments, managements & other technical services.

With the rise of middle class and increased urbanization, major populations prefer to go to for non-vegetarian. Today about 3 million farmers and 15 million agrarian farmers are employed in the poultry industry that are usually growing poultry ingredients for feed and contribute about Rs 26,000 crore to the national income.

Size of the Industry

Total contribution to the economy sales

Analysts estimate that the Indian poultry industry has been growing at a much faster pace, along with other industries such as BPO and Securities market. Over the years the poultry industry in India has contributed approximately US$229 million, to the gross national product (GNP)

Leading broiler integrators in India are as follows: 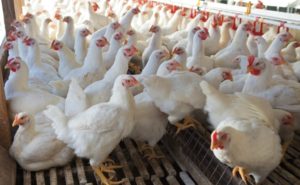 Three decades ago in India, when egg and broiler production was 10 billion and 30 million, respectively, the total employment numbers in the poultry sector was not much encouraging. As income and employment in the crop sector started decreasing, the non-crop sector, which includes dairy and poultry, underwent a significant shift. Due to the demand for poultry increasing and production reaching 37 billion broilers, the poultry industry today employs around 1.6 million people. At least 80% of employment in Indian poultry industry generates directly by the farmers, while 20% is engaged in feed, pharmaceuticals, equipment and other services according to the requirement. Additionally, there might be similar number of people roughly 1.6 million who are engaged in marketing and other channels servicing the poultry sector.