Cultivation of Rice in India: Conditions, Methods and Production:-
Rice is the most important food crop of India covering about one-fourth of the total cropped area and providing food to about half of the Indian population.
This is the staple food of the people living in the eastern and the southern parts of the country, particularly in the areas having over 150 cm annual rainfall. There are about 10,000 varieties of rice in the world out of which about 4,000 are grown in India. Rice is life for thousands of millions of people. In Asia alone, more than 2,000 million people obtain 60 to 70 per cent of their calories from rice and its products. Recognising the importance of this crop, the United Nations General Assembly declared 2004 as the “International Year of Rice” (IYR).
The theme of IYR—“Rice is life” reflects the importance of rice as a primary food source, and is drawn from an understanding that rice-based systems are essential for food security, poverty alleviation and improved livelihood.
Conditions of Growth:-
Rice is grown under varying conditions in India from 8° to 25° N latitude and from sea level to about 2,500 metre altitude. It is a tropical plant and requires high heat and high humidity for its successful growth. The temperature should be fairly high at mean monthly of 24°C. It should be 20°- 22°C at the time of sowing, 23°-25°C during growth and 25°-30°C at the harvesting time. The average annual rainfall required by rice is 150 cm.
It is the dominant crop in areas of over 200 cm annual rainfall and is still an important crop in areas of 100-200 cm rainfall. The 100 cm isohyet forms the limit of rice in rainfed areas. In areas receiving less than 100 cm annual rainfall, rice can be grown with the help of irrigation, as is done in Punjab, Haryana and western U.P. About 40 per cent of rice crop in India is raised under irrigation. However, it is the temporal distribution of rainfall, rather than the total amount of annual rainfall which is more decisive. The rainfall should be fairly distributed throughout the year and no month should have less than 12 cm of rainfall. Lesser amount of rainfall is required as the harvesting time approaches.
The fields must be flooded under 10-12 cm deep water at the time of sowing and during early stages of growth. Therefore, the fields must be level and have low mud walls to retain water. This peculiar requirement of rice makes it primarily a crop of plain areas. Rice grown in well watered lowland plain areas is called wet or lowland rice.
In hilly areas, the hill slopes are cut into terraces for the cultivation of rice. Such a cultiv 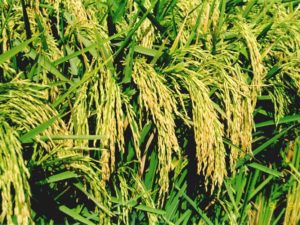 ation in which the hill slopes are cut into terraces is called terraced cultivation. The supply of water to the hill terraces is not as much as in the plain areas and the rice grown in hilly areas is called dry or upland rice.
Rice can be grown on a variety of soils including silts, loams and gravels and can tolerate acidic as well as alkaline soils. However, deep fertile clayey or loamy soils which can be easily puddled into mud and develop cracks on drying are considered ideal for raising this crop. Such soil requirements make it dominantly a crop of river valleys, flood plains, deltas and coastal plains and a dominant crop there. High-level loams and lighter soils can be used for quick maturing varieties of rice. Black lava soil is also useful for rice cultivation.
Rice culture is not much suited to mechanisation and is called ‘hoe-culture’. Most of the work in preparing the seed-bed, in broadcasting seeds, or in transplantation of plants from nurseries to the fields, in harvesting and in winnowing operations is done by human hand. Thus it is a labour intensive cultivation and requires large supply of cheap labour for its successful cultivation.
It is, therefore, primarily grown in areas of high population density which provide abundant labour and at the same time, offer ready market for its consumption. In most rice producing states, labour is locally available but in Punjab and Haryana, rice cultivation mainly depends upon the migrant labourers from Bihar and eastern U.P. To sum up it can be said that rice needs plenty of heat, plenty of rain, plenty of alluvium and plenty of labour to provide plenty of food for plenty of people. There is no other food crop which is so plentiful as rice in India.
Methods of Rice Cultivation:-
Following methods of rice cultivation are practised in India.
1. Broadcasting method:
2. Drilling method:
3. Transplantation method:
4. Japanese method:
Rice Cropping Seasons:-
Rice is grown almost throughout the year in hot and humid regions of eastern and southern parts of India where two to three crops in a year are not uncommon. But in the northern and hilly parts of the country, the winters are too cold for rice cultivation and only one crop is grown in those areas. Table 24.1 gives the period of sowing and harvesting the rice crop.
Production:- 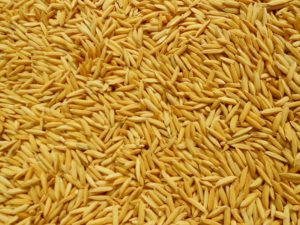 India is the second largest producer and consumer of rice in the world after China and accounts for 21 per cent of the world’s total rice production. Table 24.2 gives the trends in production of rice for selected years. A look at this table shows that there has been considerable increase in production, area and yield of rice in India.
In a span of 53 years from 1950-51 to 2003-04, the production, area and yield have increased by about four times, one and a half times and three times respectively. It is interesting to note that the rate of increase in production is much higher than the rate of increase in area under rice cultivation. This is due to the increase in yields as a result of better inputs and farm practices.
Thus, there has been a modest gain in extent of cultivated area but a substantial gain in yield and production. Increased irrigation facilities in drier areas, reclamation of waterlogged soils and introduction of new high- yielding strains crops (particularly in Punjab, Haryana and Tamil Nadu) made this possible.
There was a record production of 93.3 million tonnes in 2001-02. Yield also reached at the highest level of 2,077 kg/hectare. But imprecedented drought conditions in 2002-03 resulted in sharp decline in production, area and yield of rice in India. However, a modest recovery was made in 2003-04.
In spite of the spectacular progress, our yield of 2,051 kg per hectare (2003-04) is much lower compared to 3,600 kg in China, 4,770 kg in America, 6,246 kg in Japan and 6,556 kg in Korea. This means that there is still vast scope for increasing production. This will have to be done by increasing yields because scope for increasing area under rice crop is negligibly small.