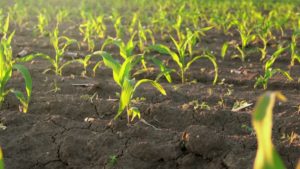 Maize varieties:-
There are a multitude of maize varieties available. The choice of variety will depend on market requirements, environmental conditions, whether the crop is irrigated and the level of disease resistance required. Varieties are continually changing so ensure you have up-to-date varietal information.
Time to flowering:-
Under conditions of adequate soil moisture, mid to slow maturing hybrids will produce a higher yield than quick maturing hybrids. Therefore, growers aiming for maximum yields should consider a mid to full season maturity hybrid. However, where irrigation is limited, a mid-season hybrid may produce more yield per megalitre of water. This may also be the case in fully irrigated situations where it is desired to limit the number of irrigations for economic reasons or to plant a following crop to obtain maximum utilisation of seasonal conditions. In dryland environments, commercial full season hybrids can handle heat and moisture stress and then respond to a break in the weather.
Within the choice of hybrids available, growers, particularly in dryland situations, may wish to reduce the risk of yield loss caused by unfavourable seasonal conditions by planting a number of hybrids, perhaps with a range of maturities.
Cob height:-
Cob height tends to be correlated with maturity. Longer season hybrids usually have higher-set cobs than quicker-maturing hybrids. Excessive cob height, greater than 1.5m can be a contributing factor to root lodging (especially if there is wind and rain around flowering), and to stalk lodging (particularly if stalk rot has infected the plants). Lodged plants can be slow harvesting and reduce yield.
Husk cover:-
Husks function to prevent damage from Heliothis (Helicoverpa spp.) larvae, reduce ear/kernel rots (Diplodia, Fusarium) and smuts, and protect the grain from weathering. Therefore, a good husk cover (including tip cover) can be important if insects, disease, and pre-harvest rain are likely to pose threats. However, in areas where quick dry-down is necessary because of a short season, hybrids with light, loose husks may be best adapted.
Standability:-
Standability (resistance to lodging) is important because it reduces harvest losses and grain damage. Many factors contribute to standability including resistance to stalk rots, good mechanical stalk strength and cob height. Most modern hybrids have good standability but some seasonal conditions (e.g. water stress during grainfill) can cause serious lodging. Always choose hybrids with good to excellent standability.
End use:-
Hybrids generally have specific grain characteristics which govern their suitability for particular end uses such as milling for grits, stockfeed, silage or other special purpose uses.
Isolation:-
All white, waxy and popcorn varieties of maize must be grown in isolation (both in distance and time) from other maize varieties, as pollen from other crops will affect the quality of grain produced by these types. Seed companies or grain purchasers may have specific recommendations that need to be followed.
Planting maize
Planting times:-
In southern Queensland, mid-September to mid-October is the premium time. December provides another suitable opportunity, especially for dryland crops. In Moreton, maize is often successfully planted as early as mid- August. Latest plantings in these areas would occur in early to mid-January, due to likelihood of disease development in late summer/autumn.
A minimum soil temperature of 12° C is needed at seed depth before attempting sowing in mid-September. Cold conditions after establishment will slow the growth of seedling maize, often causing it´s foliage to turn purple. This is probably due to reduced phosphorus availability at lower soil temperatures. However, once temperatures begin to rise again, the crop continues to grow normally. Planting at this time will avoid flowering in mid- summer heat.
December plantings flower after mid-summer heat but may be more susceptible to diseases such as rust, leaf blights and wallaby ear, and perhaps fusarium kernel rots.
Hot, dry weather can kill pollen as it is shed from the tassel, or induce uneven flowering. For example, silk emergence from the cob may be delayed and occur when pollen is no longer being shed from the tassel, resulting in poor seed set on the tip of the ear.
In central Queensland, some waxy and grit maize is planted in mid-August to early September, especially under irrigation. However, the main crop is planted late January to first week in March, to avoid heat stress which can reduce pollen viability at flowering time.
In far north Queensland, irrigated maize is planted in late July to August. Later plantings occur in late November to late January, with the optimum time being mid-December. Successful plantings have been made in late February, but these are the exception, and this time is not recommended.

• Optimal planting time
• Preferred planting time
• d – Higher disease risk
• r – Suitable for raingrown (dryland) crops
• i – Satisfactory under irrigation
• * – Late planting not recommended
• h – High risk of heat stress during flowering
Planting preparation:-
Soil type
Maize will grow on a wide range of soil types, providing they are well drained. A pH range of 5 – 8 can be tolerated but best growth is achieved in the range of pH 5.6 – 7.5.
Maize does not grow well in saline soils. Yield reductions of 10 – 20+ percent can be experienced if soil extracts contain 2.0 – 4.0 dS/m respectively. Yield decline is likely if irrigation water has a reading of more than 1.5 dS/m. Seedling and flower growth is most sensitive to salinity.
Soil temperature:-
Soil temperature at planting depth (5-7.5 cm) at 9:00 am should be 12°C or higher, and have been on an upward trend for three or more days.
While seed will germinate at 12°C, growth is often slow and foliage develops a purple colour. Temperatures of 15°C + are safer and result in better growth.
Planting moisture requirement:-
Dryland maize should be planted on a full soil moisture profile. Irrigated crops should be irrigated pre-plant and then if using flood irrigation not watered until 6 weeks old (pre-tasselling). If conditions are hot and dry, a quick flush 2 – 3 weeks after emergence may be required.
Maize is not tolerant of waterlogging especially during seedling and flowering stages.
Seed details:-
Seed has both size and shape gradings. Size varies from 4400 seed/kg (small) to 2500 seed/kg (large).
Seed shape consists of rounds or flats. Flat seed is generally best in plate seeders, while round seed is preferred by air seeders. There is no difference between the crops produced by these seed shapes.
Information on the germination percentage and the date the test was conducted should also be with the bag.
Planting time:-
There is some variation in planting times throughout Queensland.
Plant populations:-
Recommended plant populations vary between regions.