Watermelon Planting and Care: – Farming Guide for Watermelon plantation.
Family name: Cucurbitaceae Botanical name: Citullus Lanatus
1. If you stay in warmer climates, you can direct sow seeds outdoors, but wait until the soil temperature warms to at least 70 degrees to avoid poor germination.
2. Watermelon vines area very tender and should not be transplanted until all danger of frost has passed. (To be safe, wait at least two weeks past your last frost date).
3. If you are in a cooler Climate, start seeds indoors about a month before transplanting.
4. Amend soil with aged manure or compost before planting. Watermelons area heavy feeders.
5. Watermelons prefer a soil ph between 6 and 6.8.
6. Growing the vines in raised rows, known as hills, ensures good drainage and will hold the sun’s heat longer. Space the plants about 2 feet apart in a 5 foot wide hill.
7. If you are growing in rows, space 6 feet apart by 6 feet apart.

8. Watermelons like loamy, well drained soil. Handle them gently when you transplant.
9. After you transplant, cover the plants with row covers to keep pests at bay. You will remove the row covers when you see both male and female flowers on the vine. Growing watermelons requires lots of sun, lots of water and lots of nutrients. They are greedy, rambling vines, like all plants in the cucurbiteae family (e.g. zucchini, squash, and pumpkin).
10. In the true tropics the dry season (winter) is the best watermelon growing season. Watermelons do not cope well with extreme heat or the humid, soggy conditions of our wet season/summer. Fungal disease and bugs will wipe them out in no time. If you live in a cooler climate, then summer is the time to grow watermelons. You do need at least three months of reliably hot, sunny weather to grow and ripen a watermelon. During that time your average daily maximum temperature should be at least about 20-25ᵒ C or 70-80F. Warmer is even better.
(There are different watermelon varieties, so if you are at the low end of that, look for a faster maturing variety).
Grow watermelons in full sun. You also need an abundant supply of water and nutrients (good soil).
And you need space. As I said, a rambling vine. They like to go wandering and smother everything around them.
Growing watermelons from seed: – Watermelons are grown from seed. You may be tempted to use seed out of a melon you bought, but don’t waste your time. It is almost guaranteed to be a hybrid. Hybrid varieties are special crosses that don’t grow true to type. (You would end up growing what we call pig melons. A melon variety that’s only good for feeding to the pigs).
Buy your seed, and if possible buy an open pollinated heirloom variety. Because then you CAN use your own seed next year. The open pollinated varieties are also hardier. You will find a lot more interesting varieties amongst the heirlooms then you can find in the standard collection of you local gardening centre. Start your watermelon seeds in the ground, right where they are supposed to grow. The soil should be at least 18ᵒC for them to geminate.
11. Unless you have an extremely short growing season, do NOT start your watermelon seed in a pot or pun net. Do NOT buy watermelon seedlings from a nursery.
Watermelon seed germinates easily and quickly, within a few days. Watermelon plants outgrow the seedling stage very quickly, and they don’t like transplanting. You don’t save much time and you end up with a weaker plant.
Save yourself this totally needless extra work and stick your seeds in the ground, about two cm or an inch deep.
12. Watermelons need deep, rich, .friable soils. To grow watermelons it helps to raise the soil (make mounds or ridges). Raising the soil has several advantages:
A mound or ridge is free draining (melon don’t like wet feet). If you have heavy clay soil, definitely raise the bed.
Mounds are also good if the soil is as poor as mine. I just make a mound of good soil with lots of compost in it to grow watermelons. Sometimes I plant them in what’s left over from a compost pile after I used most of the compost. If you like growing things in neat rows, or if you want to plant a large area, grow watermelons on ridges, like the commercial growers do.
Rows should be about 2m (6 ft) apart and the plants spaced at 30cm/ a foot apart. (Sow twice as many as you want, like and keep the stronger ones).
I prefer growing watermelons in clumps on a mound, in several different locations in the garden. (Mixing things up helps keeping pests and diseases at bay). If you want several hills together, keep them about 2m apart. The mound should be about one meter square and a foot high. Then I plant about ten seeds in it, in three groups of three to four seeds each. The groups are spaced about a foot apart (30 cm).
After a few weeks I can see which watermelon plants grow the strongest, and I snip off the weaker ones, leaving only one seedling in each group. (Don’t pull them up, cut them off. Or you disturb the roots of the others).
13. Growing watermelon plants: Slug and other seedling chomping critters like mulch and they like watermelons. Wait until the watermelons have outgrown the most vulnerable stage (where a slug can demolish them within minutes). Then mulch the area well. Watermelons have very shallow roots and they need lots of moisture. The soil should never dry out, and mulch helps with that.
Mulch also keeps weeds down. Weeding could disturb the shallow roots, so it’s better to not let them grow to start with. Watermelons are VERY hungry plants. If your mulch is something like compost or aged animal manures, the entire better. (Like all cucurbits, watermelons can handle fairly raw compost and manures). Otherwise, feed your watermelons regularly with something like polluted chook manure or another organic fertilizer. (Ideally you should use a high nitrogen fertilizer in the early stages, but cut back on nitrogen and give them lots of potassium once they flower and fruit). 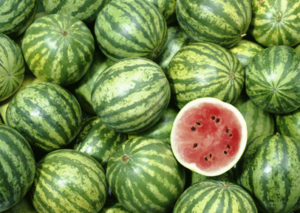 When the vines are about two meters long, pinch out the tips. It encourages branching.
As your watermelon vines grow bigger they will start trying to take over more space. If they start to smother other things you can remind them about sticking to their area y gently moving the tips of the vines, so they grow into the right direction.
14. Mulching with black plastic will serve multiple purposes: It will warm the soil, hinder weed growth and keep developing fruits clean.
15. While melon plants are growing, blooming, and setting fruit, they need 1 to 2 inches of water per week. Water at vine’s base in the morning, and try to avoid wetting the leaves and avoid overhead watering. Reduce watering once fruit are growing. Dry weather produces the sweetest melon.
16. Pruning is not necessary, but vine productivity may be improved if you do not allow lateral. (Side) vines to grow and stick to the main vine. When the plants are young, just cut off the end buds as they form (before the side shoots become vines). You can also pinch off some blossoms to focus the energy on fewer melons (though it is a challenge to kill off a potential fruit!).
17. Vines produce male and female flowers separately on the same plant. They often begin producing male flowers fall several weeks before the females appear. Do not be concerned if the male flowers fall off. The female flowers (which have a swollen bulb at the base) will stay on the vine and bear fruit.
18. Blossoms require pollination to set fruit, so be kind to the bees!
19. As fruit is ripening, prevent rotting by gently lifting it and putting some cardboard or straw between the fruit and the soil.
20. Pests: The biggest watermelon pests are the leaf eating beetles (they damage the flowers, too). Like spotted and striped cucumber beetles, pumpkin beetles with or without dots, whatever you want to call them.
Those orange things…
They all look similar and all do the same: chomp away on your watermelon plants……..
However, if they become a real problem it is mainly a sign that your watermelons are stressed.
A healthy watermelon in a balanced environment and in good soil should not attract too many beetles. Also, a watermelon should grow fast enough to cope with a few beetles.
The other main problem with growing watermelon is mildew, a fungus that make the leaves look as if they were coated with white powder. The fungus thrives in damp, humid conditions.
The best you can do is to avoid getting the leaves wet. If you can’t avoid overhead watering, do it first thing in the morning so they dry quickly. Never wet the leaves in the afternoon or evening.
In the tropics you probably won’t be able to control the beetles or the mildew, once the build up for the wet season starts. And it is not worth anyway. The oppressive heat and the humidity just are not good conditions for growing watermelon. Grow something that likes humidity and wait for the next dry season to grow watermelons again.
Watermelons are mainly cultivated in Maharashtra, Karnataka, Tamil Nadu, Punjab Rajasthan, Madhya Pradesh, and Uttar Pradesh and now started in Andhra Pradesh.
It is a trailing annual vine with stems 15m or more in length and branched tendrils having yellow flowers bearing globular to oblong fruits light green to almost black and either solid or with pale green color or marbled striped.
21. Harvest/storage of watermelon: – Watermelon doesn’t sweeten after they are picked, so harvest time is important. They generally ripen over two weeks so keep your eye on them.
How to tell if watermelons are ripe:–
1. Thump it. If the watermelon sounds hollow, it’s ripe.
2. Look at the color on the top. The watermelon is ripe when there is little contrast between the stripes.
3. Look at the color on the bottom. A green watermelon will have a white bottom; a ripe melon will have a cream or yellow colored bottom.
4. Press on it. If the watermelon sounds like it gives a little, it is ripe. (Rhodes does not like this method because it can ruin the quality of the fruit).
5. Check the tendril. If it is green, wait. If it is half dead, the watermelon is nearly ripe or ripe. If the tendril is fully dead, it is ripe or over ripe; it is not going to get any riper, so you might as well pick!
6. Stems should be cut with a sharp knife close to the fruit.
7. Watermelon can be stored uncut for about 10 days. If cut, they can last in the refrigerator for about 4 days. Wrap tightly in plastic.
Nutrition’s and health benefits of watermelon:
Watermelons are mostly water- about 92 percent- but this refreshing fruit is soaked with nutrients. Each juicy bite has significant levels of vitamins A, B6 and C, lots of lycopene, antioxidants and amino acids. There is even a modest amount of potassium. Plus this quintessential summer snack is fat-free, very low in sodium and has only 40 calories per cup.
Scientists have taken notice of water melon’s high lycopene levels- about 15 to 20 milligrams per 2- cup serving, according to the National Watermelon Promotion Board- some of the highest levels of any type of fresh produce.
Lycopene is a phytonutrient, which is a naturally occurring compound in fruits and vegetables that reacts with the human body to trigger healthy reactions. It is also the red pigment that gives watermelons, tomatoes, red grapefruits and guavas their color.
Lycopene has been linked with heart health, bone health and prostate cancer prevention. It is also a powerful antioxidant thought to have anti-inflammatory properties, according to Victoria Jarzabkowski, a nutritionist with the Fitness institute of Texas at the University of Texas at Austin.