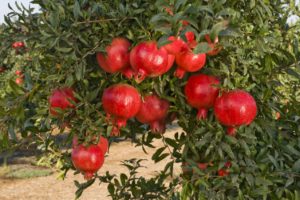 1. Maintaining soil moisture and not allowing wide variations in soil moisture depletion.
2. Cultivation of tolerant varieties.
3. Early harvesting not allowing the fruits to crack and
4. Spray of calcium hydroxide on leaves and on fruit set.
Irrigation/water supply: – Irrigation may be given depending on soil, climate and availability of water. First irrigation is provided in case of mrig bahar crop in the middle of May followed by regular irrigation till the monsoon sets in. Weekly irrigation in summers and that during winters at fortnight intervals is recommended. The check basin system of irrigation is usually followed. The average annual water requirement through drip irrigation is 20cm. Drip irrigation helps to increase the yield by 30-35%.
Training and Pruning: –
• In Pomegranate farming, plants are trained on a single stem or in multi-stem system. Since the crops trained on single stem training system are more susceptible to pest’s viz. stem borer and shoot whole borer, the other system is more prevalent in the country.
• Pruning is not much required except for removal of ground suckers, water shoots, cross branches, dead and diseased twigs and also to give shape to the tree. A little thinning and pruning of old spurs is done to encourage growth of new ones.
Inter-Cultivation in Pomegranate farming: – Inter cropping with low growing vegetable, pulses or green manure crops are beneficial. In arid regions, inter-cropping is possible only during the rainy season, whereas winter vegetables are feasible in irrigated areas.
Regulation of flower bearing: – Pomegranate plants flower and provide fruits throughout the year in central and southern India. Depending on patterns of precipitation, flowering can be induced during June-July (mrig bahr), September-October (hasta bahar) and January to February (ambe bahar). In areas having assured rainfall where precipitation is normally received in June and continues up to September, flowering in June is advantageous; where monsoon normally starts in August, flowering during August is beneficial. Areas having assured irrigation potential during April-May flowering during January can be taken and where monsoon starts early and withdraws by September induction of flowering in October is possible. Considering comparable yields, prices and irrigation needs it is recommended that October cropping could be substituted for January flowering.
Harvesting and Yield of Pomegranate farming: – Pomegranate flowers take 5 to 6 months to be ready as mature fruits. They should be harvested mature which can be judged by change in skin color to slightly yellow and metallic sound when tapped. A grown up well kept tree should gibe about 100 to 150 fruits per year. A high density system with ‘Ganesh’ 1000 plant/hectare (5X2m) has been found very profitable giving a crop of 50 fruits/tree of good quality.
After harvesting, fruits can be cured in shade for about a week so that the skin becomes hard and fruits can stand transportation better. Thereafter, the fruits can be graded according to weight: –
• ‘A’ grade – 350g & above
• ‘B’ grade – 200 to 350g & above
• ‘C’ grade – Less than 200g
Cured fruits have good keeping quality which can further be prolonged through cold storage. When stored at 00C to 4.50C with 80% Relative Humidity fruit remain safe even for seven months.
Post Harvest management in Pomegranate farming: – 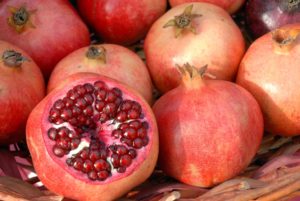 1. Grading and storage:
• Fruits are graded based on their weight, size and color. The various grades are super, king, queen and prince-sized. Besides that, pomegranates are also graded into two grades-12A and 12B. Fruits of 12 – A grade are generally preferred in southern and northern region.
• Fruits can be stored in cold storage up to 2 months or 10 weeks at a temperature of 50 C. Longer storage should be at 100 C and 95% RH to avoid chilling injury and weight loss.
2. Packing and Transportation: –
• The size of packages varies according to the grade of the fruits. Corrugated fiber board boxes are mostly used. In a single box, 4-5 queen sized fruits, 12 princes sized and some of 12- A and 12- B grades may be packed. The white colored boxes having 5 plies are generally used for export purpose, whereas red colored ones having 3 plies are used for domestic markets. The red colored boxes are cheaper than white colored ones. The cut pieces of waste paper are generally used as cushioning material.
Marketing: – Majority of the producers sells their produce either through trade agents at village level or commission agents at the market.