Introduction of Plum fruit: – A plum fruit popularly known as “Aloobukara” in India. The commercially cultivated plum trees are medium in size, usually pruned to 5 to 6 height. Without pruning, the plum trees can reach up to 12 meters height can spread across 10 meter.
Health Benefits of Plum: – Some of the health benefits of plums are listed below.
• Plums in its dried form which is known as ‘Prune’ are high in unique phytonutrients called neochlorogenic acid. Plums have high content of Vitamin C. They are known 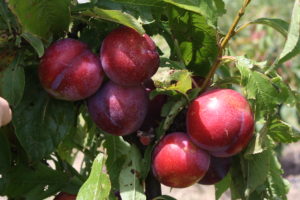 to be good anti oxidants.
• Plums are rich in Vitamin A, B, (Thiamine), riboflavin and some other minerals like iron, phosphorus and calcium.
• Consumption of plums helps in the production and absorption of iron in the body, thus leading to better blood circulation in the body.
• Consumption of plums helps in the production and absorption of iron in the body, thus leading to better good circulation in the body.
• Plums have anti cancer agents which may prevent cancer in the body.
• Consuming plums may reduce the chance of contracting a heart disease in the long run.
Commercial Varieties of plums cultivated in India: – Most of the commercial Plum varieties are grown in India belong to Salicina (Japanese) group. Their fruits have best taste and are suitable as fresh fruit while others for processing. For important plum verities cultivated in India for plains requiring low cooling period.
Agro Climatic conditions for Plum farming: – Plums usually require more cooling (Chilling: 300 for 1000) than peach fruit and almond. These are generally grown in the mid and low hill regions. Warm summers and cool winters are best suitable for Plum cultivation. A few Japanese plum commercial varieties are also grown successfully in the sub mountain tracts of Haryana & Punjab.
Soil requirement in Plum Farming: – Plum grows in wide range of soils. However coarse sandy soils that dry out fast during hot summer and heavy clay soils that are water logged for longer periods should not be selected. Sandy loam soils which are in deep in nature with good water drainage should be ideal for plum trees thrive well in neutral soil, with a ph range 5.0 to 6.5.
Propagation and Rootstock in Plum Farming: – Plum fruits can be propagated successfully on wild apricot, peach and plum rootstocks. Peach rootstock is recommended for light soils. Apricot rootstocks or plum Kabul green gage cuttings are recommended. Rooted cuttings of Kala Amritsar can be used directly without budding. The planting distance of 15cm X 30cm is ideal for its cultivation.
For raising rootstock, like peach, plum seeds are sown in November. Usually they germinate in spring season & their seedlings are allowed to grow single stemmed. Pencil thickness of seedlings is budded during May to June season. T-budding or Shield gives good results. Remaining seedlings can be bench grafted during December to January.
Plantation in Plum Farming: – After the scion has grown for 1 year, the plum plants can be planted in the main field in winter season @ 6m X 6 meter apart from row to row and plant to plant in square system method, accommodating about 275 trees/hectare.
Training and pruning in Plum farming: – Plum plants should be trained according to open centre depending upon growth habit of the varieties. Many types of the Japanese group having a spreading habit are better adapted to open centre of training, whereas upright growing plum plants should be trained to modify & 4 to 5 well spaced secondary branches should be obtained. Since plum bears fruit on 1 year old wood and spurs on older wood, only light pruning should be given to bearing trees in January month to encourage new growth and healthy spurs.
Manures and fertilizers in Plum farming: – The amount of fertilizers and manures depends on soil type, plants age. Normally in Plum farming, sandy soils require more amount fertilizers than heavy soil types. 60 kg urea (30 g N ), a dose of 6 kg farm yard manure (FMY) , 95 grams of super phosphate (15 grams P2 O5) and 60 grams of potash (36 grams K2O) per year age of the tree is optimum to meet the nutrient requirement of plum. After 6th year, the fertilizer dose should be increased to 36 kg of farm yard manure (FMY), 360 grams or urea, 570 grams of super phosphate and 375 grams of potash. Subsequently the same dose may be repeated. P and K and farm yard manure (FMY) should e applied in December month. In spring, half of N should be applied before flowering and the rest half 1 month later.
In case of Zinc deficiency on sandy soils, correct this by foliar spraying of 3 kg zinc Sulphate along with 1.5 kg unsliced lime in 500 liters of water.]
Inter cropping in Plum farming: – Leguminous crops like black gram, green gram, cluster bean and pea can be cultivated as intercrops, during the non-bearing fruit period of the plants. 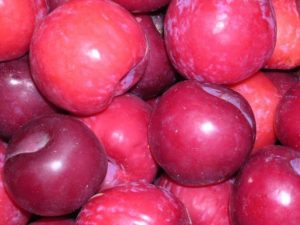 Fruit thinning in Plum farming: – Thinning should be done by hand before the pit hardening stage and fruits should be spaced 5 to 8cm apart.
Weed control in Plum farming: – Weedicides should be used to control weeds in plum planting. A pre-emergence application of Duran with the amount of Treacle 3kg/hectare or 4 kg/hectare Samisen 4 kg/hectare is recommended. Post emergence application of Glyph sate 800ml/hectare Gramm ox one at 2 liter/hectare is found very effective.
Irrigation/Water supply in plum farming: – Plants must be given sufficient water during March to May month depending on variety to induce new growth, flowering and fruiting. In subtropical areas, plum plantation requires highest water during April to May which coincides with the extensive fruit development period.
Harvesting in Plum Farming: – As plum very perishable, they should be packed with good care. The optimum maturity standard varies with variety of fruit and intended use of fruit. If you are planning for local consumption, plum should be allowed to ripen on tree itself. Since all plum fruits do not ripen at the same time these should be harvested in several pickings.
Yield of Plums: – It all depends on variety of fruit cultivated and farm management, on average yield can be expected up to 40 kg/tree.