Little bit about Grape farming: – Grape cultivation or farming is one of the most lucrative and profitable farming in India.
Regions of Grape cultivation: – Grape is cultivated under a variety of soil and climatic conditions in there distinct agro-climatic zones, namely, sub-tropical, hot tropical and mild tropical climatic regions in India. Grapes are grown in both temperate and tropical climate. In tropical climate vines remain evergreen. Grapes perform well where there is no or little rain at the ripening time of the grapes.
In sub-tropical Region: – This region extends the northwestern plains corresponding to 28ᵒ and 32ᵒ N latitude including Delhi; Meerut district of Uttar Pradesh; Hisser and Lind districts in Haryana; & Bathinda, Ferozpur, Gurdaspur and Ludhiana districts of Punjab. Vines undergo dormancy and bud break starts in the first week of March while the rains start in the first week of June, and therefore, only 90-95 days are available from the initiation of grown to harvest. Consequently, ‘Perlette’ is the only early ripening type cultivated in this region. Rain is harmful and this damage is a problem with Thompson Seedless in this area. Single pruning and a single harvest is the accepted practice here.
In hot tropical Region: – This region covers Nashik, Sangli, Pune, Satara, Latur and Osmanabad regions of Maharashtra; Hyderabad, Ranga Reddy, Mahbubnagar, Anantapur and Medak Districts of Andhra Pradesh; and Bijapur, Bagalkot, Belgaum, Gulberga districts of northern Karnataka lying between 15ᵒ and 20ᵒ N latitude. This is the main viticulture area accounting for 70 percent of the region under grapes in the country. Vines do not undergo dormancy and double pruning and a single harvest in the general practice in this region. Maximum and minimum temperature is 42ᵒ C and 8ᵒ C. Thompson seedless and its seedless are the types of grapes grown in this region.
Land Preparation for Grape Farming: – 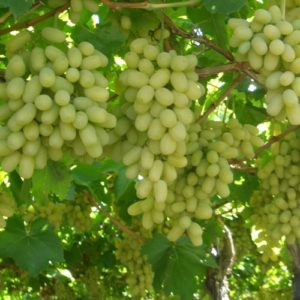 Suitable Soil for grape farming: – Types: Grapes are found cultivated on a variety of soil types. The best soil types for grapes are known to be well drained loam to sandy loam with good organic matter. Poorly drained, alkaline soils should be avoided. Grapes grown well on soils having less than ph 8.7 and EC up to 1.5mmhos/cm, calcium carbonate up to 10 percent and lime concentration up to 20 percent.
The land is tilled and laid into plots of 120m X 180m separated by 3m wide roads. Land within a plot is leveled perfectly to have a gradient of less than 1 percent in any direction manner to sure uniform distribution of water through the emitters of drip irrigation systems.
Trenches of 75cm width, 75cm depth and 118m length in a north-south direction with a gap of 3m between trenches are opened with heavy machinery. They are closed with topsoil, up to a height of 45cm after 15 days exposure to sun. The remaining gap is filled with a mixture of soil, cattle manure, single superphosphate, sulphate potash and micro nutrients. Usually, 50kg of cattle manure 2.5kg of superphosphate, 0.5kg of sulphate of potash and 50g each of ZnSO4 are added to the soil for every running meter length of the trench.
Best Planting Season for Grape Farming:
The best season for planting the rooted cuttings of cultivated varieties in the main field is September-October whereas for rootstocks it is February-March.
Spacing in Grape Farming:
Distance generally varies with the varieties and soil fertility.
System Planting Distance number of vines per Hectare
Head system 2m X 1.5m 3300
Knifing system 3m X 3m 1089
Bower system 3m X 6m 561
Pruning of Vines in grape farming:
Pruning should be done in January every year when the vines are still dormant. Keep only healthy fruiting canes with the recommended number of buds per cane depending upon the cultivar?
The rest of shoots are pruned to one or two buds. These are called renewal spurs. These spurs sprout to give healthy shoots which are selected as fruiting canes in the coming years. A balance 1:2 is kept between fruiting cane and renewal spurs. In Madurai area staggered pruning is done to get fruit all along the year.
In the mild tropical areas, vines are pruned two times & the crop is harvested twice. In varieties like Gulabi and Bangalore Blue, Which are fairly resistant to rain damage and in which fruit bud differentiation is not impaired by cloudy weather and rains, pruning is done at any time of the year. As a result, five crops are harvested every two years.
In hot tropical areas, vines are pruned two times but only one crop is harvested. All canes in a vine are pruned back to single node spurs in March-May to develop canes and the canes are forward pruned in October-November for fruiting. The number of nodes retained on a cane varies with the variety and cane thickness. There is no scope to prune earlier than October and later than November to unfavorable climate conditions.
Manures and Fertilizers used in grape farming:
As vineyard soils are either sandy loams or heavy clays, the usage of organic manure has assumed critical and high importance in India. To the recently planted vines apply 20gm of urea in March and repeat the dose in May and July to complete the growth up the bower in one season. From second year onward for vines planted at 3 X 3m distance the following fertilizers doses and schedule may be adopted. 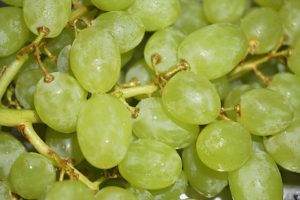 Apply whole farm yard Manure (FYM) and super phosphate as well as half N and half K fertilizer just after pruning. Apply remaining N and K after fruit set in April. Use of these does have encouraged excessive vegetative growth on all vines irrespective of the system of training adopted, particularly in clay loam soils.
Weeding control in grape farming:
Vines are planted closely and normally on bower system hence due to shade weeds could make little growth. But in vineyards trained on knifing and head system the weeds get ample irrigation, nutrition and light to flourish. Therefore, it is very necessary to control the weeds.
Weeds between the rows of vines are removed mechanically by tractor drawn implements. Within the rows, weeds are manually hoed and removed. Sometimes the post-emergent weedicides, mainly glyph sate at about 2.0kg/ha or parquet at about 7.5kg/ha is sprayed in fully grown vineyards.
Inter cropping: No inter crop should be grown in vineyards as growing of inter crop shall be at the cost of training of vines.
Harvesting & Yielding:
Grapes must be harvested only when all the berries have developed the unique color and desired TSS of the cultivar.
Grapes are harvested by repeated pickings since the bunches do not ripen at one time. Taste is the most valuable indicator of the ripeness of the bunch. The barriers at the shoulders ripe first followed by centre and tip of the clusters.
Pests, Disease Management & Control:
The most important pests of grape farming in India are flea beetles, thrips, mealy bugs and leaf hoppers. The important grape diseases are anthracnose, downy mildew, powdery mildew and bacterial leaf spot. In recent years, Alter aria is also becoming a serious pathogen.
• Anthracnose is prevalent in all grape growing areas of the country. The disease is characterized by little light brown or grayish black lesions on tender shoots, young leaves, flowers and young berries. Bordeaux mixture at 0.8 percent, copper ox chloride at 0.25 percent or carbendazim at 0.1 percent is used to control this disease.
• Downy mildew is the most devastating disease of grapes in the tropical are of the country. The disease mainly appears on the leaves, but also attacks the flower clusters and young fruits. The losses are very high when it attacks the clusters before fruit set. Entire clusters decay, dry and drop down. Properly neutralized Bordeaux mixture at 1 percent, copper ox chloride at 0.2 percent, Mannose at 0.2 Percent, metalaxyl (Recoil Mz at 0.2 percent) or phosethylal (Aliettle at 0.2 percent) are used against this disease.
• Powdery mildew is prevalent in all the grape growing areas. It is next in importance to downy mildew in its devastating severity. The disease is characterized by the presence of white powdery (ash like) coating in patches on two sides of the leaves, young shoots and immature berries. Powdery mildew is managed and controlled easily by wet able Sulphur formulations. A wide range of fungicides, namely, Calaxin at 0.7 percent, Karathane EC at 0.04 percent, Myclobutanil (Systhane at 0.05 percent), Traiademifon (Bayleton at 0.1 percent) and Penconazol (Topes at 0.025 percent) are used to control this disease.
Bacteria infect leaves, shoots and berries. The symptoms appear as minute water soaked spots on the lower surface of the leaves, especially along the main and lateral veins. These spots coalesce and form larger patches. Severally infected leaves give a blighted appearance. Streptomycin at 500ppm in used as a prophylactic spray, while Bordeaux mixture at 0.8 percent or copper oxy chloride at 0.15 percent is used to check its spread.