Description & storage
Long thick-skinned edible fruit that is yellow when ripe.
Keep bananas on a fruit dish in the living room at room temperature. If you want the bananas to ripen faster place the bowl in the sun. Like other tropical fruits and tomatoes and bell peppers, never store bananas in the refrigerator. Below 8 degrees Celsius the fruit will decay from the inside. These fruits will not ripen but will turn black in the refrigerator.

Bananas have thrived on the Asian subcontinent for thousands of years. As early as the 13thcentury, however, tropical fruits were a novel concept amongst Europe’s aristocracy. Marco Polo regaled Europeans with tales of strange and unusual fruits, including the banana. In the US, the 100th anniversary celebration of the Declaration of Independence featured a banana as its exotic showpiece.

In India, bananas are integral parts of the culture. The god Vishnu proclaimed of the fruit, “As the bark and leaves of the kadali tree are to be seen in its stem, so thou art the stem of the universe and all things visible to thee.” Even today, followers of Shiva and Vishnu believe banana plants are auspicious. Upon attending an Indian wedding, one may see a banana stalk near the stage symbolizing fertility, and women desiring a son thereafter may worship the plant during the month of Kartik. 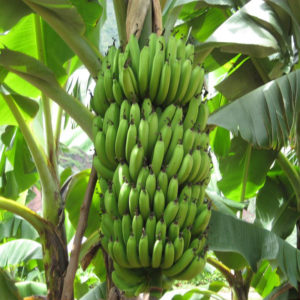 Bananas originate in Southeast Asia and the South Pacific. According to an article published by The University of California, Santa Cruz, archeologists pinpoint the Kuk valley of Papua New Guinea as the first site of banana domestication circa 8,000 BCE. Since then, several regions domesticated other banana varieties via hybridization and centuries of refinement. The same article theorizes bananas first appeared in India around 6,000 BCE. Around this period, the fruit flourished throughout the tropics of Australia, Malaysia, and Indonesia.

Today, bananas grow on nearly every continent. 2011 figures published by the UN Food and Agricultural Organization list that India is the largest banana producer in Asia; Ecuador in South America; Tanzania in Africa; Guatemala in Central America; Colombia in South America; Spain in Europe, and Iran in the Middle East.

Bananas grow year-round in India, and her citizens consume most of the country’s whopping 30 tons produced annually. Additionally, bananas is the nation’s 7th largest crop. The only foods surpassing banana’s yield are essentials such as rice, buffalo milk, wheat, and—perhaps surprisingly—sugar cane and mangos.

India’s fertile soils support hundreds of banana varieties, but farmers only cultivate roughly 12 local and 30 exotic varieties commercially. Each of these types varies subtly in their taste, appearance, and even aroma. According to the book, “Fruit Crops,” India mostly exports Dwarf Cavendish and Robusta varieties, and locals consume Poovan, Rasthali, Virupakshi and Chakkarakeli varieties.

Where to find Banana in India:

Bananas are a staple food, found in the smallest thatched hut in Mizoram to the gleaming high rises in Mumbai. No produce shop is without a bundle of bananas. Some vendors tie them from their rickety tin roofs, while others line the shelves with five varieties

The quality of bananas may not be as high in the temperate northern states, but regular transport from the south—coupled with the odd banana plantation here and there—make the fruits easily accessible.
Checking for Ripeness:

With the exception of plantains and a few select varieties, bananas should be yellow; not green. They are also sweetly aromatic when ripe. Though many shun eating bananas with brown/black spots, these mottled fruits are actually at peak sweetness and perfectly edible.

Unripe bananas are hard and light, whereas ripe bananas feel soft and heavy for their size. Additionally, the stem near the top of the banana should peel with ease. If the stem is impossible to bend, it’s likely unripe.

Ripe bananas have a soft, chewy, and almost-mushy texture. Some banana variants have a tougher texture near the core, but all should be pliable and sweet. Unripe bananas are bitter and tough, and the pulp will coat the tongue with a chalky, unpleasant taste if eaten.